Borderstanians: You can get police alerts for a specific area or areas when you sign up for alerts through the MPD’s system. Here is an example, below, of one I received last night about a gun robbery at 15th and V Streets NW at 7 p.m. To sign up for alerts, go to alert.ema.dc.gov.

Courtesy of Dupont Forum on Yahoo! Groups… two events next weekend at the Historical Society of Washington, D.C.

The Historical Society of Washington, DC, is located at 801 K Street NW (Mount Vernon Square Metro stop). All events are free unless otherwise indicated. For more information, visit the Web site or call 202 383-1800.

The next membership meeting of the Dupont Circle Citizens Association (DCCA) is this Tuesday, December 2, at the Phillips Collection gallery at 1600 21st Street NW, from 7 to 9 p.m. “Artful Evening at the Phillips” is the theme of the meeting with a tour of the “Christo & Jeanne-Claude: Over the River” exhibit. A reception follows at Mark & Orlando’s Restaurant, 2020 P Street, NW.  This event is free and open to everyone. For more information about DCCA, contact President Joel Lawson.

The Logan Circle Holiday House Tour will be held on Sunday, December 7, 2008 from 1 to 5 p.m. This year’s tour–sponsored by the Logan Circle Community Association–will feature East Logan. There will be a special emphasis on the rich history of residential and commercial alley life in Logan’s own Blagden Alley and Naylor Court. The tour will also feature the Blagden Alley studio of world-renowned master printmaker David Adamson.

Tour participants are also welcome to a Wassail reception hosted at the Long View Gallery, at 9th and N Streets, N.W. from 3 to 5:30 p.m. the day of the tour. Proceeds from the tour benefit LCCA’s ongoing community improvement efforts.

For information, or to volunteer, please contact LCCA’s Tim Christensen.

If you have been following the story of the Columbia Heights teenager suspected of being a serial robber–but turned loose twice by the court system following his arrest–this WaPo story will make you feel a bit better:

A teenager being sought by D.C. police in a string of robberies in the Columbia Heights area turned himself in yesterday, ending a two-day search in a case that generated a police-led e-mail campaign and much community attention. Police said they have charged Michael Richardson, who recently turned 18, as an adult in a robbery on the grounds of Cardozo High School. A similar charge was filed last week, but the case was dropped by prosecutors, who said evidence was lacking. Richardson was released after that charge was dropped, in what D.C. officials called a mix-up. More: Read entire WaPo story.

This case is a good example of the power of citizens working with police to bring attention to a public safety problem. D.C. Police Inspector Edward Delgado, commander of the Third District Substation in Columbia Heights, played an important role in Richardson’s arrest and detainment. Through an email campaign, Delgado asked residents to contact the D.C. attorney general’s office and D.C. U.S. Attorney’s Office, demanding that Richardson be re-arrested and detained. The result was a floof emails by residents to authorities.

Richardson was then arrested on Friday, November 21–but released because of a paperwork glitch. Police believe he may have committed two more crimes between November 21 and 26 when he was arrested once again.

You have to wonder: How often do papework glitches in the court system result in suspects being released back into Bordersan?

It’s chilly again, and those who live outside are at risk of hypothermia and frostbite. If you see someone suffering out in the cold, please make a call to Shelter Hotline Transport at 800-535-7252. They make periodic rounds in the city, but, when alerted, will go directly to the location of someone who may be at risk for hypothermia. Those who turn down transportation to a shelter will be offered blankets and warm clothing. 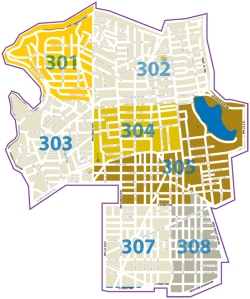 The monthly community meeting of Police Service Area (PSA) 307 is this Wednesday, December 3. The meeting is at the Washington Plaza Hotel, 10 Thomas Circle, at 7 p.m.

The D.C. government has suspended the standard regulations, making it easy for Washingtonians to rent their homes to visitors for the January 20 inauguration. (Image: BarackObama.com.)

You may have already heard the news, but it’s worth repeating for those in Borderstan who are thinking about renting their home to out-of-towners in January… for the inaugural festivities of Barack Obama and Joe Biden.

Borderstan is pretty close to ideal for anyone–resident or visitor–who wants to take in some of the January 20 Inauguration festivities. We can walk to the White House and Pennsylvania Avenue… restaurants, clubs and stores are right outside our front doors.

D.C. Mayor Adrian Fenty has pretty much suspended the usual rules regarding permits, sales taxes and such for Washingtonians who want to rent out their homes as hotel rooms next month for the 2009 Inauguration.

The D.C. Department of Consumer and Regulatory Affairs has even drafted a sample lease to use when renting to guests. You can download the sample lease online (PDF). 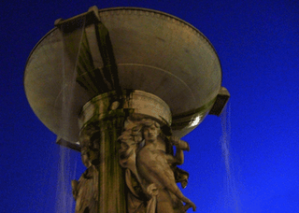 Borderstanians: In addition to the two gun robberies on Thanksgiving Eve in Borderstan, there have been a number of violent street crimes in the past two weeks, some involving guns, just west of Borderstan. The crimes have been concentrated north of Dupont Circle between 17th and 20th Streets and R and T Streets NW.
The following information about these crimes is from MPD Lt. Erich Miller, PSA 208.

Arrest Made in Theft from Auto

PSA 208 officers made an arrest in a Theft from Auto case on November 27 in the 1600-block of O Street NW.  The suspect is identified as Reginald Teneyck, 52-years old, no fixed address.

Borderstanians: There were two gun robberies in the heart of Borderstan on Thanksgiving Eve. Both of the robberies were on 15th Street–the first on the 1700-block (north of R Street) and the second on the 1600-block of 15th Street (south of Corcoran Street). Descriptions of the suspects are below with the crime info.
The following information about the muggings is from MPD Lt. Erich Miller, PSA 208, even though both crimes technically occured in East Borderstan on the east side of 15th Street NW, in PSA 307.
Incident 1: Robbery Force & Violence at 1717 15th Street NW

The MPD has announced the results of last weekend’s all hands on deck policing effort:

Nov. 25-Metropolitan Police Chief Cathy L. Lanier announced today results of the citywide All Hands on Deck (AHOD) Phase IV, which began at 6 am Friday, November 21, and continued through 6 am on Sunday, November 23, 2008. This AHOD was a citywide effort involving various DC government agencies including the Department of Human Services, Department of Public Works, and the Department of Employment Services among other agencies that followed up with clients already in their systems and made referals to address residents’ needs throughout the city.

Borderstanians: The follwoing holiday shopping season safety tips are from the MPD Web site, courtesy of Field Training Officer K.A. Sodimu of the Fourth District/PSA 401; they were posted to the Dupont Forum on Yahoo! Groups.

As we are all excited about the holiday shopping season, so are the criminals–they are getting ready to take advantage of any mistake we make. Remember that criminals also need to buy presents, too–for their kids, spouses, parents, grandparents, girlfriends and boyfriends. Criminals also drive and visit people, too, and if they do not have the money or the means to get around, they are coming for ours. So, we have to be proactive and remember to put into action all the safety tips that learn throughout the year. The following safety tips are from the MPD Web site:

Disclaimer: Some materials have been compiled from a variety of sources, and are subject to change without notice. I do not warrant or make any representations as to the quality, content, accuracy, or completeness of the information.

Please remember you are our eyes and ears and we can not do this without you, take care and have a safe and happy shopping. – K.A. Sodimu

In case you somehow missed it… new developments last week in the 2006 murder of Robert Wone on the 1500-block of Swann Street NW: