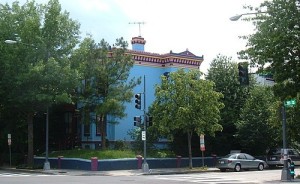 The southwest corner of 15th and R NW. (Photo by WasWoWashington on Panoramio.)

Borderstanians: I received an email today from Christopher Ziemann at the DC Department of Transportation (DDOT) about the plans to reconfigure traffic on 15th Street NW (Borderstan’s Main Street).

DDOT has decided to implement Alternative 5, which was not part of the original four alternatives that were proposed for 15th Street. You can view Alternative 5 at DDOT’s Web site; go to page 2 of the PDF.

Here is what will happen to 15th Street under Alternative 5:

The email message from DDOT’s Ziemann, along with some helpful Q&A, follows.

Thank you to all those who responded with comments and questions to the 5th alternative for reconfiguring 15th Street. Again, this alternative would maintain 15th Street as a one-way street for vehicles with three lanes, but add a northbound striped bike lane and a southbound protected bike lane on the west side of the street between the parked cars and the curb.

The final tally of comments received by email show 15 in favor of Alternative 5, 2 opposed, and 52 unrelated (such as preferring a different alternative, two-way traffic in general, etc.). Therefore DDOT has decided to pursue Alternative 5.

This would be done as a pilot project, to be evaluated and possibly replicated in other parts of the District. If successful, plans can be put into place to make this solution permanent, or to pursue some variation of this. This will be the first of its kind in the District, both as a separated bicycle lane, and also as a counter-flow lane to one-way traffic.

DDOT is finalizing the details and funding plan for this pilot project, and will provide updates when they are available. Thank you all again for your input, this has been very valuable. If you would like to see the original analysis or the draft analysis again, please visit

There were a lot of good comments and questions, which I have listed and answered below.