Delhi, India: Located in northern India, the metro area has 16 million people, second to Mumbai in India, and the eighth largest in the world. (Image: newKerala.com.) 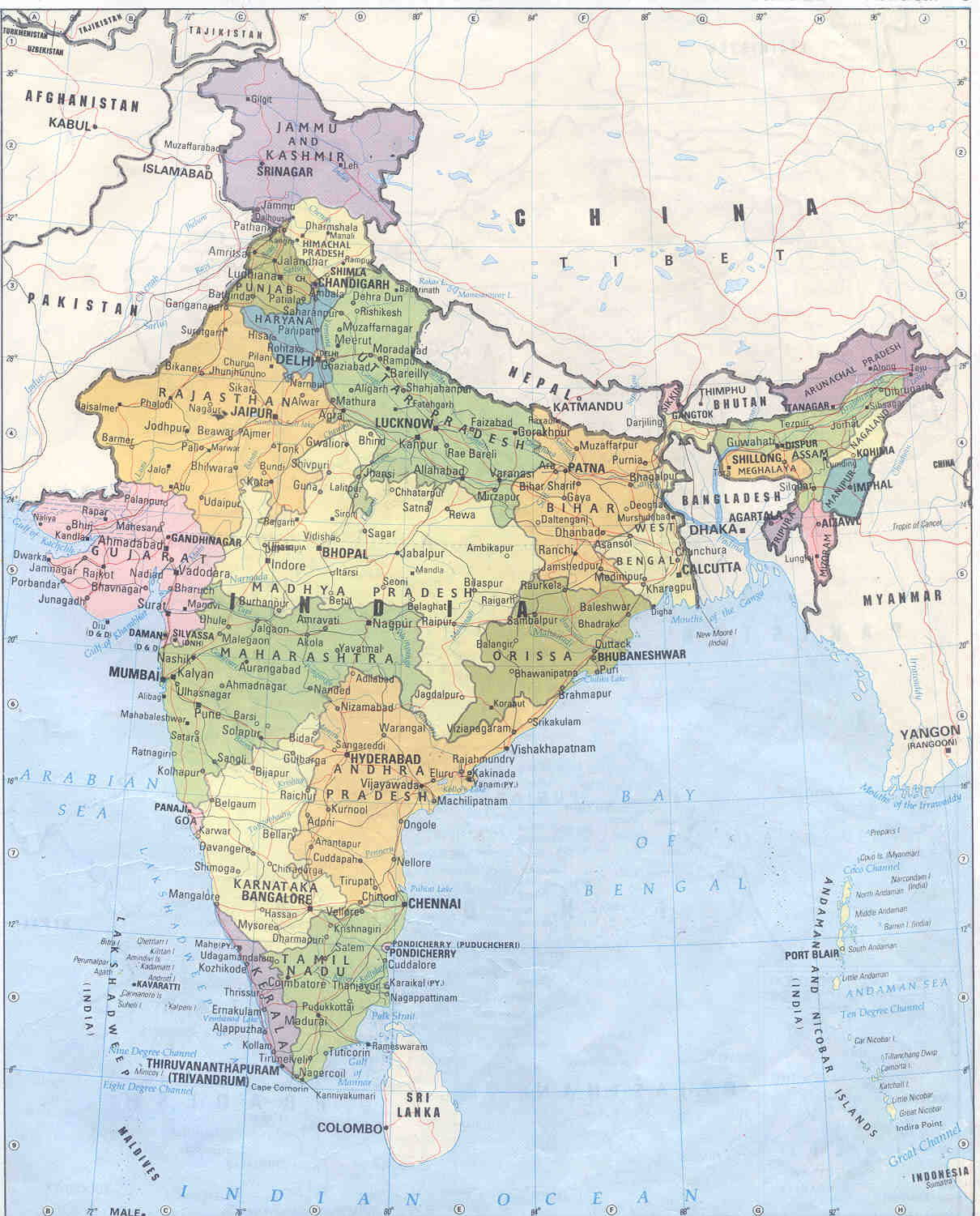 India has an estimated at 1.2 billion people, second only to China, and 70% live in rural areas. The landmass is about one-third that of the U.S. (Image: geocities.com.)

Editor’s note from mattyillini: “Popeye” is a new contributor to Borderstan and will be posting “Delhi Dispatches,”  periodic reports on life in Delhi, India. He and his wife, “Olive Oyl,” are former Borderstanians, neighbors and friends of ours. They  moved to India almost two years ago (Olive Oyl is originally from India) and are the proud new parents of a baby girl, “Swee’Pea.” No, these are not their real names, but there are lots of strange people out there and Popeye asked that we use pseudonyms.

This morning, Olive Oyl and I had an appointment at the U.S. Embassy in New Delhi, the capital, to apply for our daughter’s U.S. passport.

As we were getting ready to head out the door–rummaging through documents at the last minute, etc.–the doorbell rang.  Happy at the thought of our driver arriving a few minutes early, I walked out onto our balcony expecting to look down and see our taxi driver waving up at me.

To my surprise (astonishment, really), I saw a group of about 10 eunuchs looking up at me who, upon seeing me, immediately started singing at the top of their voices, dancing and playing musical instruments.

Yes, I used the word ‘eunuch,’ though I’m not entirely sure that’s the correct word.  The people I am referring to have sexual characteristics of both men and women (some born that way, others not).  They–“hijadas”¹ as they are called in Hindi–have a crucial, defined role in Hinduism.

Since Hindu gods have both male and female traits, hijadas are closer to god than typical men or women… or closer than me, anyway. It’s supposed to be very auspicious to have their blessing for a wedding or a new-born baby. And failure to pay the hijadas can result in some pretty strange and embarrassing public behavior on their part–in front of your house with all of your neighbors watching, nonetheless.

Better to just pay the hijadas and keep everyone, including the gods, happy. So, while I was surprised at the time by the enthusiasm of Olive Oyl’s mother and grandmother as they rushed downstairs to pay them, I now understand why.

One of the first questions that popped into my mind–other than Is this really happening?–was how the hijadas found out where my wife and I (or most importantly our daughter, Swee’Pea) live.  My wife pointed out that a number of people could have spread the word of Swee’Pea’s arrival: our maid or the person who delivers the bottled water, for example. Or perhaps someone in the hospital where she was born gave the hijadas our address.

Regardless of their network of informers, the size of the hijadas’ demand struck home the efficiency of it all. And as much as they asked for, that they would have asked for even more had our child been a boy.

Anyway, at the end of it all they went on their way and we were able to make our appointment (albeit a bit late) at the embassy. We couldn’t just walk through this crowd of singing and dancing folks and jump into our taxi.  We had to take care of them. So I guess the blessings from the hijadas did come in handy after all.

India is just full of surprises. One never knows what they’re going to see when they turn the corner–or walk out onto their balcony looking for the taxi driver.

¹ Editor’s note: Read this article, “Hijra,” at wikipedia.com for more information about hijra, their place in South Asian society and the problems they face with discrimination.