A reminder that DC AIDS Walk 2009 is coming up on Saturday morning… with the pre-Walk program at 8:30 a.m. at Freedom Plaza. The annual walk benefits the Whitman-Walker Clinic and proceeds help people living with HIV-AIDS in the metro area. (Remember that WWC is our neighbor here in Borderstan.)

Here is the statistic you need to know: 1 in 20 adults in DC has HIV-AIDS, an extremely high rate in the United States. Your support is needed.

If you are walking on Saturday and want to solicit donations for yourself and/or your team, post a link in the comments section right here on this posting. On Thursday, I will do a posting with the listings that are in the comments. For example, I am on the Luis Gomez Photos Team. So, include your name and/or your team name and link.

This week the Borderstan Movie Fan makes some recommendations about food movies. Next week she will review health care-related movies (yes, really).

Julie and Julia is a very good movie, especially for those who bought Mastering the Art of French Cooking in the early sixties and tried to cook from it. I’ve gone back to look at my copy. The stains on its pages show that I cooked a few of Julia’s recipes a lot–the spinach, potato, and mushroom soups, the chicken breasts (suprêmes de volaille), the hamburgers. END_OF_DOCUMENT_TOKEN_TO_BE_REPLACED 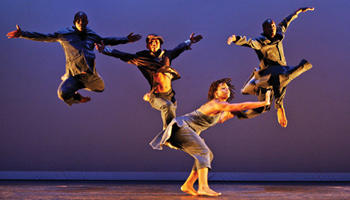 If you’ve always wanted to try a dance performance, but not sure what to see and on a budget, your time has come with Velocity DC. On Friday and Saturday, October 2 and 3, for only $15, come sample six of the best dance companies from DC (and beyond) at the beautiful Sidney Harman Hall at 610 F Street NW.

Mary Burgan, The Borderstan Movie Fan, is back tomorrow with “Movies for Foodies.” We plan to post her reviews on Wednesdays.

Two new fast-food places are coming to Connecticut Avenue NW above Dupont Circle. Flippin Pizza is opening a store at 1745 Connecticut NW. The chain has seven stores in the DC suburbs and four more in California. They claim, “It’s like pizza in New York.” I hope so.

Meanwhile, a much bigger food chain, Smoothie King, is opening a store at 1621 Connecticut NW. They are nationwide and already have a store at 1300 Pennsylvania NW and several stores in the DC suburbs.

Yes, I would rather have locally owned stores that are not chains. But when real estate prices and leases go sky high and we’re in a recession, this is what we will get. Furthermore, I would be happy to see both of these chains open on the 14th Street corridor. More cheap food, please!

UPDATE: This was a bank robbery, not a mugging. I based my posting on the Police Alert. Thanks to dcist and commenters for the update and correction.

Should I feel better that our muggers are getting classier?

Got this police alert today. I wasn’t going to post about it, but then I thought, “Oh, this is a bit different.” You do hear of this approach to holding up people on the street–business attire–but I don’t remember it being employed recently in DC. The mugger struck at 16th and K NW this morning at 9:16, complete with hat and briefcase:

And you have to love the irony of mugger in a suit on K Street.

Dcist has more on the September 3 incident in which a Metrobus struck jogger Amanda Mahnke.

Joel Bergner and one of his murals, “The Afro-Colombian Mural: Currulao y Desplazamiento,” just off the 1300-block of U Street NW (Photo: Luis Gomez Photos)

Luis took this photo of the artist with his mural while out walking along U Street. This mural, “The Afro-Colombian Mural: Currulao y Desplazamiento,” by Joel Bergner is in an alley just off the south side of the 1300-block of U Street NW. You can see it from the sidewalk the next time you walk by there. Luis has seen other murals around town that Bergner has done.

Bergner is a native Illinoisan, who lived in Chicago’s Pilsen neighborhood, which helped to inspire his work. More photos after the jump.

END_OF_DOCUMENT_TOKEN_TO_BE_REPLACED

These are the most popular postings from the last 30 days. 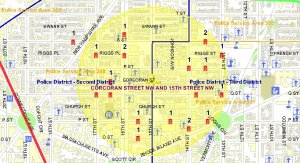 Click to enlarge: This map shows the location of violent crimes between July 24 and September 22 in the Borderstan crime reporting area. (Image: MPD Crime Search database)

I decided to look up the Borderstan¹ crime stats for the past 60 days and compare them to the same 60-day period in both 2007 and 2008. I had a feeling that the past 60 days were worse than last year; this was the case for the month of August. (See “UPDATED: Borderstan August Crime Up 37% From Last Year” and “Borderstan Crime Up 15% in August; 26% in 2 Months.”)

And my hunch was that it was the last 60 days or so that were noticeably worse. My hunch was based on the seemingly large numbers of robberies with guns in the area recently. I even looked at the numbers for the last 90 days–overall crime was up compared to the previous two years, but not as much as when one only looks at the last 60 days.

IMPORTANT NOTES: The increases in crime in the Borderstan reporting area are in noticeable, concentrated areas. The increase in violent crime, especially robberies, seems to be concentrated in an area between Rhode Island Avenue and U Street and from around 9th to 16th Streets NW. When you look at the stats for this 60-day period for Police Service Areas 208 (Dupont Circle) and 307 (Logan Circle-Shaw), the picture is a bit different.

In PSA 307, crime was slightly down (including violent crime) and the number of robberies was the same in 2009 as in 2008 for this 60-day period. In PSA 208, violent crime is virtually the same for this period in 2009 as it was in 2008 (robberies went up to 39 from 35 last year). However, property crime in 208 is up a whopping 41% from last year for the July 24-September 22 period, driven by increases in thefts and thefts from autos; burglaries are up slightly.

For the Borderstan crime reporting area¹, here are the specifics for the July 24-September 22 period: END_OF_DOCUMENT_TOKEN_TO_BE_REPLACED

You may notice that by putting these two events in one posting that I am playing to a stereotype of Borderstan: a place where outsiders believe dogs are more important than kids. Well, tough. It’s been a long week and I don’t feel like doing two separate postings. So, here is an event for families with kids and an event for families with dogs. END_OF_DOCUMENT_TOKEN_TO_BE_REPLACED

Welcome back, Borderstanians. I hope you got some ideas from my posting last week on some movie classics from the 1930s and 1940s.

This week I am offering some advice on what I call classic “sexy movies,” which is probably a bit different than what passes for sexy in the currently running category.

I was educated in a series of convent schools, so I haven’t seen much pornography, but last week I did see on the TV, once again, Burt Lancaster and Deborah Kerr embracing in a prone position on a beach in Hawaii. I remembered the first time I saw 1953’s From Here to Eternity. I may have gone to confession for so enjoying one of the sexiest movies ever. Just the line “I never knew it could be like this,” could send a girl into mortally sinful thoughts. END_OF_DOCUMENT_TOKEN_TO_BE_REPLACED

UPDATE from Metro: “A Metrobus operator who struck a pedestrian on September 3 at Florida Avenue and Connecticut Avenue, NW, was terminated from her position as a bus operator on September 21. She was dismissed for failing to follow standard operating procedures. The operator was placed on paid administrative leave following the accident, which is standard procedure. She had been a Metrobus operator since August 2000.”

The following message is from the brother of Amanda Mahnke who was hit by a Metrobus on the morning of September 3 at the corner of Connecticut and Florida Avenues NW. END_OF_DOCUMENT_TOKEN_TO_BE_REPLACED