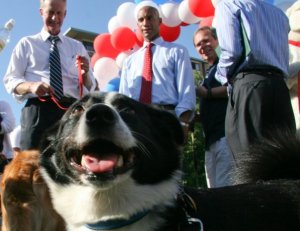 Ug. Summer is sort of over, but autumn doesn’t officially begin until September 23. In the meantime, here’s a cute-dog-pic for you: Lupe at the opening of the 17th Street dog park last Thursday with political poobahs.