The neighborhood and community police listservs have been abuzz with a report of a home invasion that occurred Monday evening the 25th on the 1200 block of W Street NW. Commander Jacob Kishter of MPD 3rd District confirmed the details of the crime.

According to police, three residents of the block were robbed inside their home at gun point by three intruders. One of the residents was taking garbage outside when he or she was approached by one of the assailants who asked, “Is this where the party is?”

The three assailants then were able to enter the residence. The suspects were armed with guns and forced the three residents onto the floor. They stole numerous items from the home, and took the victims’ cell phones before ripping out the home’s land lines. The suspects are two African American males and one African American female, all armed. The three victims were not seriously harmed.

This is one of the more depressing Crimes of Notes posts that I have done in some time, especially in terms of robberies and stolen autos. The only silver lining in the crimes noted below is that only two were gun crimes.

The recent number of robberies has been noted by Police Service Area (PSA) 208, and we got the following message last night, which was targeted to the Dupont-Logan area:

Of late there have been an increase of street robberies around the DC Metro area, PSA 208 nor the Second District is immune from these. There is not a specific suspect lookout but there is a very specific target, the iPhone. To help combat this problem we are asking the users of all phones and PDAs to use good street sense and be completely aware of their surroundings.

In other words, people, it is a bad idea to chatter away on your cell phone (especially an iPhone, it seems)… totally unaware of your surroundings… particularly at night… and especially when you are by yourself on a quiet street. However, a number of these crimes occurred in relatively busy areas, including 15th and P NW last evening at 7:06 p.m. (more details below the fold).

Following are crimes of note–robberies, assaults, burglaries and stolen autos–that occurred between January 16 and January 25. There was also a hit and run of a pedestrian early on Sunday morning at 14th and U NW.

END_OF_DOCUMENT_TOKEN_TO_BE_REPLACED

First, there were records. Then there were the 8-Track and cassette tapes. Next came CDs. Now music is digital. So, who would open a record shop in 2006 and make a go out of it? And who buys vinyl now? It’s dead, right? Wrong.

The store is Som Records on 14th Street and the owner is Neal Becton. (Som is Portuguese for sound.) After a string of amazingly diverse jobs around the globe, he worked for The Washington Post for 10 years as an editorial aide in the newsroom. Becton then left the Post in 2003 to co-run Crooked Beat Records in Adams Morgan. He had collected records for years and most of his extra income went towards them, so it was a logical move for him.

Then Becton left Crooked Beat after three years to do his own thing. “I always dreamed of owning my own record store. I started telling friends I was going to open a shop and after telling enough of them, I had to go ahead and do it.” He opened Som Records in the downstairs space at 1843 14th Street NW in 2006–on a rapidly changing block just south of T Street near Café Saint-Ex.

Becton says the best part of owning your own business is being able to take a vacation whenever you want. “The worst part is paying for your own health insurance.”

Becton sells new and used vinyl LP’s and the store carries “super rare jazz records to dollar-bin 80s rock and everything in between.” He sells a few CDs, but more than 95% of the stock is vinyl.

END_OF_DOCUMENT_TOKEN_TO_BE_REPLACED

The Memorial to Durval Martins on the park fence at 11th and Q Streets NW.

The memorial to Durval Martins remains at 11th and Q NW, where he was murdered on December 16, 2008. The police have no leads into his death and there is a $50,000 reward for information on the case.

The benefit event at Policy was last night, but you can still donate to the United for Haiti benefit for Partners in Health. Proceeds help victims of the recent Haiti earthquake..

Pothole season has arrived. And as that commercial reminds us, potholes cannot report themselves, so we have to do it for them. (In the Midwest–where the changes in temperatures are more extreme than in DC–pothole season is a fifth season between winter and spring.) END_OF_DOCUMENT_TOKEN_TO_BE_REPLACED

Tonight is Third Thursday on the 14th and U Street corridors with many businesses open until 9 p.m. (Luis Gomez Photos)

Tonight is Third Thursday for the members of the MidCity Business Association in the 14th and U Street corridors. Every third Thursday of the month, several dozen shops and galleries are open until 9 p.m. with sales and special offerings. A full listing is below the fold. END_OF_DOCUMENT_TOKEN_TO_BE_REPLACED

Courtesy of Greater Greater Washington, here is interesting news for the on-the-street car parkers in the the Dupont-Logan-U Street area:

“DC has a secret law that only select residents know about: It’s actually legal to park closer to many corners than the signs say. Or actually, it used to be, but the law expired, according to Councilmember Tommy Wells’ office. Unfortunately, the DC Secretary doesn’t keep laws up to date online, so it’s difficult to get all the details… Kicking off election season, Councilmember Tommy Wells has introduced a bill to make it officially legal to park up to 25 feet from such intersections, and to within 10 feet at night. According to Wells’ press release, concerns about public safety prompted this effort to make parking near homes easier late at night.”

Get the details about corner parking in the evenings in David Alpert’s GGW full post. However, in our section of town, we all know the corners at which the parking enforcement officers will give you a pass or will ticket you. Some people refer to them as “legal illegal parking spots.” 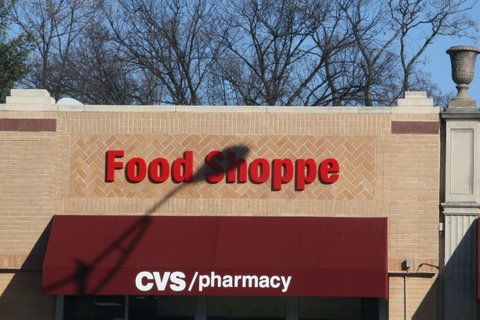 Why? The use of Middle English in this “Food Shoppe” sign at the CVS in Cleveland Park is designed to… do what exactly?

In our series of occasional Why postings, we bring you the “Food Shoppe” at the CVS on Connecticut Avenue in Cleveland Park. We happened upon this commercial and language abuse on a recent Saturday.

The issue here, of course, is the CVS use of “shoppe” instead of “shop” to name its food section. END_OF_DOCUMENT_TOKEN_TO_BE_REPLACED

For the first half of January, the number of robberies in the Borderstan area is about par while the number of stolen autos (nine) seems quite high. Two things stand out on the robberies: three on January 7 on 16th/17th/S Streets, all in the same general area; and two more robberies on T Street, one on 9th and one on 13th Street.

Following are crimes of note in the Borderstan area for the January 5-18 period in Dupont, U Street and Logan. Crimes of note are property crimes such as stolen autos and burglaries, and violent crimes such as robberies and assaults. END_OF_DOCUMENT_TOKEN_TO_BE_REPLACED

This Friday: Local 16 is hosting “Friday for Haiti” with Oxfam America to beneift victims of the Haiti earthquake. Donation is $25 and time is 6:30 to 10:30 p.m. (Luis Gomez Photos)

All of your $25 donation and 10 percent of the evening’s bar proceeds will go to Oxfam America.

In addition to helping Haiti, your $25 donation will get you free beer until 8pm, or until the kegs run out… $5 and $7 specialty cocktails… free food buffet featuring appetizers from the chef.

You can still donate even if you cannot attend the Friday fundraiser at Local 16; go to the Oxfam fundraising page to make a donation. More information is available at the event’s Facebook page, the Oxfam donation page and the DGFG web page.

Several hundred Loganites lined up tonight for free pizzas at the HomeMade Pizza store at 14th and Church NW. It was the first of two nights of a soft opening for the chain store. The official or “hard” opening is Thursday afternoon.

According to Eric Fosse, founder and CEO, HomeMade Pizza gave away about 250 medium-sized pizzas tonight.

“Word of mouth is the best advertisement,” Fosse said. The store will be giving out free pizzas again Wednesday from 4 to 7 p.m.

Located at the northwest corner of 14th and Church, the store is next to the soon-to-open Cork and Fork. HomeMade Pizza specializes in ready-to-bake pizzas for home.

Mary the Borderstan Movie Fan reviews movies with an operatic theme or twist.  Her column runs every two weeks and previous reviews are at the bottom of this column.

Two Saturdays ago, I went to a movie house to view the live HD broadcast of Richard Strauss’s bittersweet opera Der Rosenkavalier from the Metropolitan Opera. In addition, I went to Carmen last Saturday.

I had to book tickets for both performances at a theater way out of town. All the theaters within Metro distance were sold out–not only for the Saturday matinee, but for the later “encore” Wednesday evening!

Note: Tickets for the last three operas of this season will sell out quickly, so hurry to find a seat.