Click to enlarge. Location of 25 robberies committed with a gun in 2009. (Data and image: MPD Crime Database)

The single largest increase was in thefts, which were up 20% from 2008. Thefts-from-autos increased 6%. 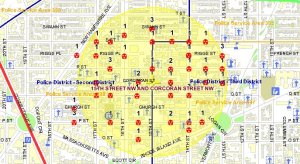 Click to enlarge. Location of 54 robberies committed without a gun in 2009. (Data and image: MPD Crime Database)

Overall, the two-year trend is very similar to the one-year trend. Since 2007, violent crime has decreased 13% while property crime has increased 14%.

Click to enlarge. Location of 55 burglaries in 2009. (Data and image: MPD Crime Database)

Burglaries have decreased each of the past two years. However, thefts have increased 16% in two years and thefts-from-autos are up 31%. The number of stolen autos has declined by 19% in two years.

A detailed chart is below the fold.

¹ The Borderstan crime reporting area (see three maps above) covers a circular area that radiates 1,500 feet from 15th and Corcoran Streets NW–an area that runs  from 13th Street/Logan Circle west to New Hampshire Avenue/half way between 17th and 18th Streets, and from Rhode Island Avenue/O Street  in the south to T/Caroline Streets in the north. The Borderstan crime reporting area includes parts of Police Service Area (PSA) 208 (west of 15th) and PSA 307 (east of 15th), with a sliver of PSA 305 in the northeast.