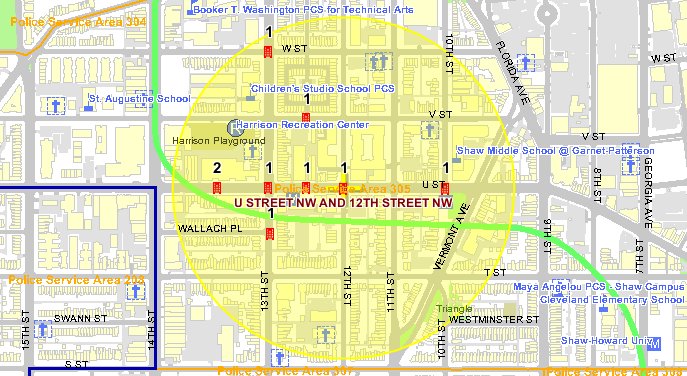 In March there were 9 violent crimes, including 6 assaults, in the U Street Corridor area, between 9th and 14th Streets. Six of the 9 crimes were actually right on U Street. Statistics in the chart below are for the area shown above. A more detailed description of this geographical area is at the bottom of this post. (MPD Crime Database)

As noted last month, we are doing something new here at Borderstan with crime stats. We are now doing monthly postings with crime stats for areas that are hubs of three of the main business and commercial corridors in the Dupont–Logan–U Street area: 12th and U NW, 14th and Q NW, and 17th and Q NW.

These are approximately the centers of the U Street, 14th Street and 17th Street commercial corridors. As centers for neighborhood life, they can also be crime magnets. But, all three of the reporting areas listed above will encompass surrounding residential areas as well, as shown in the map above for the U Street corridor.

Summary of March Crime Stats for U Street Corridor

¹ The U Street Corridor crime reporting area (see map above) covers a circular area that radiates 1,000 feet from 12th and U NW–an area that roughly runs  from 14th Street on the west to 9th Street on the east and from W Street on the north to S Street on the south. This area is in Police Service Area (PSA) 305, which is part of MPD’s Third District.