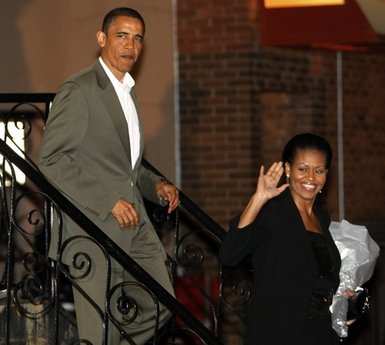 Motorcades we get by the handfuls in this neighborhood: the president, the vice president (“Hey, Joe!”) and visiting heads of state. But a presidential visit to a 17th Street restaurant is still news, and tonight President Mrs. Obama ate dinner at Komi. Located at 1509 17th Street NW (just north of P Street), Komi is often mentioned as one of DC’s best eateries.

So, here is a little info on the 1.0-mile trip (says Google Maps) from 1600 Pennsylvania up to Borderstan, courtesy of the White House press pool:

At 6.58 the motorcade departed the White House en route to Komi, where the Obamas are having a date night. People gathered on a few corners near WH on foot and on Segways (sp?) Observed as we turned up 16th Street. As we rolled up 16th-no sirens and stopping for lights-most pedestrians ignored us but on some faces you could see the fact that it was an Obama motorcade registering.

Arrived at restaurant at about 7:08.

Komi, which is located on 17th Street/Dupont Circle serves Greek/Mediterranean/modern food and is reportedly very expensive. People wishing to get in and at the place where your pool is holding are being wanded by the Secret Service.

The Obamas exit Komi around 9:15 pm this evening. (AP photo)

Several people are standing on corners and across the street waiting to view the first couple.

The first couple emerged from Komi at 9:13 and were greeted by the crowds that had waited for two hours to see them. But by then it was dark and black vans blocked most of the view. Still, they cheered, screamed and clapped. You poolers are guestimating that there were at least a couple of hundred onlookers

It appears that the diners in Komi gave them a standing ovation as they left.

MObama was carrying a wrapped bouquet and both were wearing huge smiles.

Uneventful ride back to WH. Arrived at 9.19. 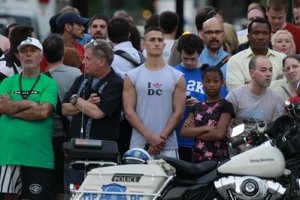 Locals waited at 17th and P NW for a glimpse of President and Mrs. Obama. (AP photo)

more stories
Previous
Mystery City #6: This City is…
Next
This Weekend in Borderstan: A Shortage of N’s