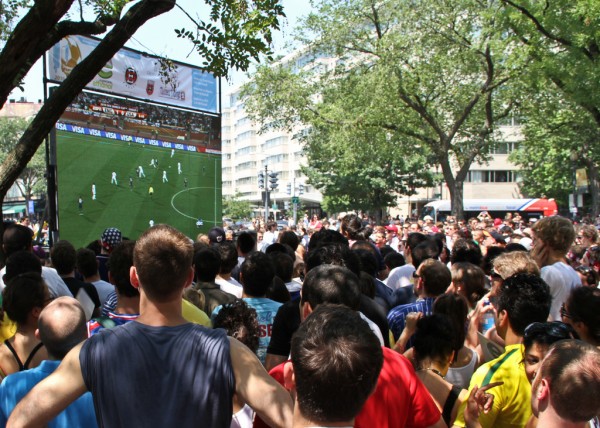 Soccer in the Circle drew thousands of futbol fans today for the three FIFA World Cup matches shown on two large screens in Dupont Circle. Soccer in the Circle day is part of the Dupont Festival series, which brings events to Dupont Circle. The weather was sunny and hot with temperatures in the 90s. There was a soccerpalooza-type atmosphere to the event, but the crowd was relaxed and organizers kept the day’s events running smoothly. Special guest was legendary US Men’s National Soccer Team defender Eddie Pope.

Korea defeated Greece 2-0 in the 7:30 am match, Argentina beat Nigeria 1-0 in the 10 am match, and in the days’ grand finale the USA managed a 1-1 tie with England. The crowd erupted in cheers when the USA scored its only goal, which came in the second half.The 2010 World Cup is in South Africa, which is six hours ahead of Washington.

SITC organizers are still raising money in hopes of staging another event on July 11 for the World Cup final match. The group raised approximately $20,000 to cover today’s event.

On the Web, the SITC team has an official Flickr group for uploading photos and videos of our event. SITC has a Facebook Page as well. For other social networking sites, including Twitter, the group is using the tag SITCDC (Soccer in the Circle DC).

What is Dupont Festival?

The purpose of Dupont Festival is to organize and implement a wide range of outdoor and indoor activities in the greater Dupont Circle area throughout the year. SITC says that they hope to “screen the World Cup final on July 11 and stage other events in the Circle during the year,” but still need help with funds. The Festival will have a table in the park for donations by cash and check. Donations can also be made via the group’s PayPalsite. Dupont Festival is a project of Historic Dupont Circle Main Streets, a non-profit group with 501(c)(3) status.