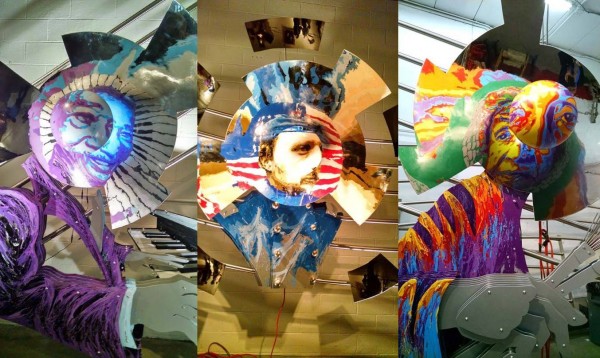 A new 120-by-16 foot sculpture installation is coming to the 700 block of P Street, NW, across the street from the Kennedy Recreation Center.

The project will be unveiled Thursday, June 11, and will stretch across six recessed spaces along the block. Civil War hero and Shaw neighborhood namesake Col. Robert Gould Shaw, legendary jazz musician Duke Ellington and painter Alma Woolsey Thomas will be depicted in the artwork.

The sculptures — created by D.C. native Zachary Oxman– project 3D optical illusions through their use of multiple flat and concave layers of polished steel.

An opening ceremony will begin at 6 p.m. along the 700 block of P Street NW at the City Market at O mixed-use development, and will be followed by a gallery reception featuring other works by Oxman at Long View Gallery from 6:30-8 p.m.

The special effects are part of a concept that Oxman said he is emphasizing in recent work. He said it makes the art dependent on the viewer’s perspective, forcing the work to include passersby in its execution.

“I’ve created these works of art that are as dynamic of an experience as you can get,” Oxman said. “And like any work of public of art, it has multiple points of experience as you travel past it. There’s the future, the present and the past, just like the history itself.”

In 2012, Oxman created a statue of Duke Ellington sitting on a treble clef and playing a curvy wrap-around piano. Titled  “Encore,” it rests across from the Howard Theater on T St NW.