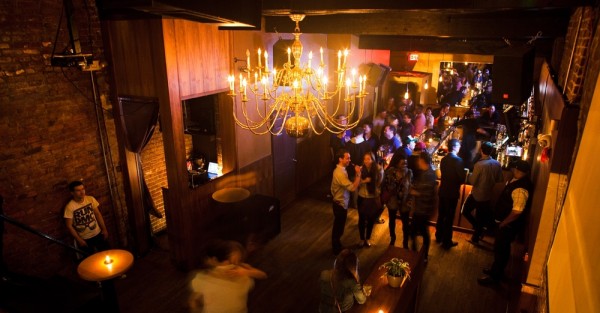 Bourbon, the whiskey-soaked Adams Morgan hangout, wants patrons to bring their kids along for happy hour.

Each Friday from 5 to 8 p.m., the bar opens its upstairs space to grown-ups and kids alike during “kiddy happy hours.” The idea is simple: Drinks for the adults, cartoons, music and coloring for the kids.

Jessica Dallesasse, Bourbon’s general manager, says the bar started its kid-friendly happy hours about six months ago when a patron complained they had nowhere to take her kids during happy hour.

Now, Dallesasse says the event attracts up to 20 parents each week, and even more during the school year.

While parents buy drinks and food at happy hour prices, kids can munch on chicken nuggets, french fries and mac and cheese from the bar’s kitchen.

And even though kids can roam the upstairs bar freely, they’re always within view of their parents, Dallesasse says. “It’s not like they just drop them off and walk away,” she adds.

Are the kids well-behaved? Dallesasse says, mostly. “There’s never been any temper tantrums or anything,” she says. “The only thing that can get loud is all the kids running around.”