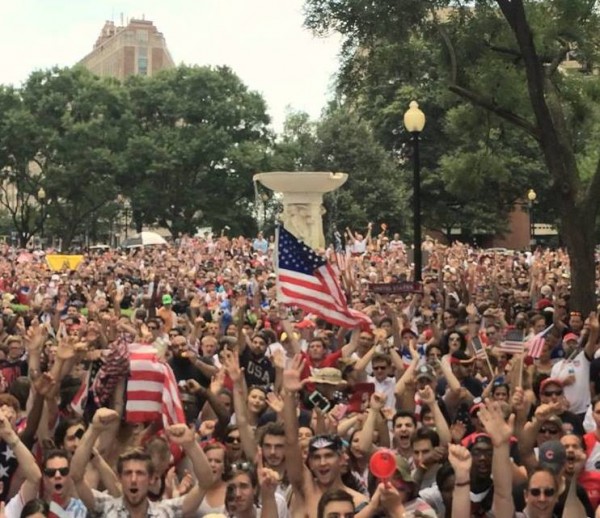 Hundreds of fans are expected to pack Dupont Circle to watch the Women’s World Cup match between the U.S. and Sweden this Friday evening.

Though kickoff starts at 8 p.m., the event, sponsored by the Swedish embassy, officially begins at 5:30 p.m. with a DJ spinning “Swedish-oriented” dance music.

The game will be shown on a large screen in the middle of Dupont Circle. Attendees should plan to bring their own seating.

Dupont Festival co-founder and event organizer Aaron DeNu says the game should be an exciting one.

There’s also a good chance that live shots from the Dupont Circle viewing party could be featured during the national broadcast on Fox.

“At last year’s U.S. vs. Germany World Cup match,  [ESPN] was doing live shots of Dupont Circle during the game,” says DeNu. “All indications are that [Fox] will do that this year.”

To celebrate the occasion, local vendors will be handing out free snacks and non-alcoholic beverages to attendees.

Six Dupont-area bars will also coordinate with the event to offer World Cup-themed drink specials throughout the game. The bars are:

“We’re encouraging folks to go to the surrounding Dupont Circle bars before and after the game,” DeNu says.