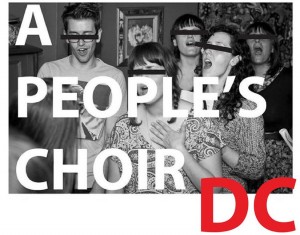 A crowd of strangers will sing in unison this Thursday evening at Stetson’s on U Street, but it won’t be a sporadic event.

Instead, the sing-along is organized by A People’s Choir DC, a monthly meetup group devoted to hosting public singing sessions.

“A People’s Choir DC is a casual sing-along,” reads the event’s Facebook page. “It isn’t a performance; it’s a group effort.”

The idea works like this: People get together at a bar, order drinks and sing loudly over popular songs. And, well, that’s about it.

Each month, the group belts out tunes related to a specific theme. This month’s sing-along is an ode to D.C. weather, and as such, the group will sing along with such songs as Vanilla Ice’s “Ice Ice Baby,” AC/DC’s “Thunderstruck,” and “California Dreamin'” by the Mamas and the Papas.

Attendees will receive a lineup of the night’s songs and a printout of the lyrics at the door.

Though you might be skittish singing in front of people you don’t know, People’s Choir D.C. founder Jenny Koch says it’s really not a big deal. If you don’t know a song, make up the words. If you want to sit one out and chat, that’s okay too. And newcomers are always welcome.

“Although we have a bunch of people who come regularly, we also get lots of new people every time,” she says.