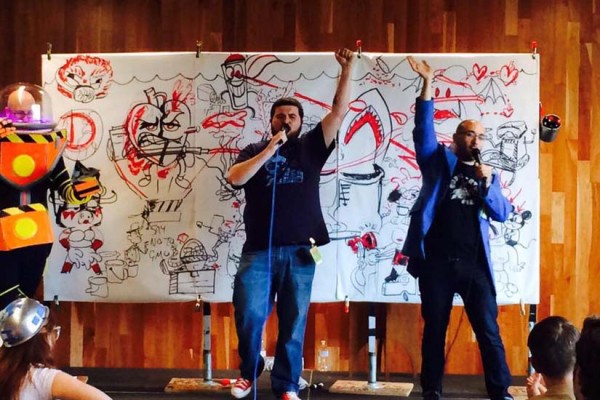 Ten artists will face off in a test of speed, creativity and scribbling during the show on the Black Cat main stage Saturday night at 9:30 p.m.

“But unlike pro-wrestling, none of the show is pre-planned,” says Nover. “It’s less about how great the art work comes out, and more about how funny and great the moment was when it was created.”

During the bout, artists are encouraged to undermine each other’s illustrations by adding their own mischievous input to their opponent’s work. At the end, audience applause determines the winner.

Attendees should expect the show’s usual wacky decorations and costumes to be kicked up a notch for Saturday’s 80’s-themed show. Michael Bracco, known as Baron Von Sexyful on stage, created two decorations that Nover describes as “the worlds craziest mash-up T-shirt” of cartoon characters and pop culture icons.

The show will also include Synful Pleasure, an ’80s cover band, and live DJing from the The Megadrives.

Tickets are available online for $15 and a $3.90 service fee. The show is for all ages.