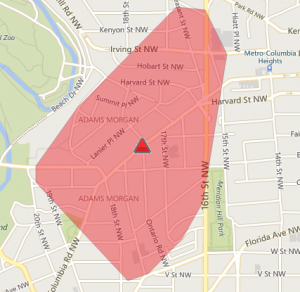 It wasn’t a solar flare or a malicious attack.

“At roughly 11:13 a.m. yesterday, we had a feeder trip at one of our stations,” explained Beal.

A feeder is a power line that typically services 1,500 or more customers, Beal added.

Crews were eventually able to pinpoint the location of the cable that caused the feeder to trip. “There was an actual physical cable failure in a manhole near the 2300 block of Champlain Street [NW],” said Beal.

By 3 p.m., crews had rerouted power around the cable, and electricity was restored to most of Adams Morgan.

Our story was linked among the evidence.

Within hours of being linked on Gawker, Borderstan began receiving some curious theories regarding the nature of the outage.

“According to my research, I believe it was a solar flare that caused this,” tweeted one reader.

“Norse sensors from around the world are detecting an attack on America from China,” wrote another commenter. “Your government just doesn’t want you to panic, that’s all.”

But Beal set the record straight.

“It was definitely not related to a solar flare,” he says. “It was a faulty cable.”

more stories
Previous
Apartment Fire Closes Part of U Street NW
Next
PHOTOS: Dozens of Local Artists to be Exhibited in Adams Morgan