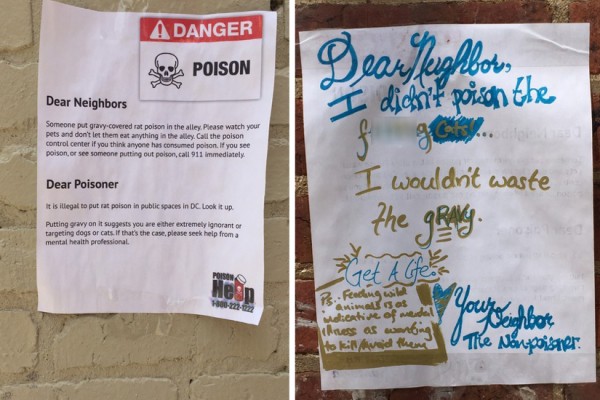 Some Columbia Heights residents are squabbling over the recent appearance of “gravy-covered rat poison” in an alley near the intersection of 11th and Monroe streets NW.

“Someone put gravy-covered poison in the alley,” reads a flier that first appeared in the alley on Friday. “Please watch your pets and don’t let them eat anything in the alley.”

“It is illegal to put rat poison in public spaces in D.C. Look it up. Putting gravy on it suggests you are either extremely ignorant or targeting dogs or cats,” continues the flier.

“The first sign appeared two days ago, posted about a dozen times,” he wrote in an e-mail to the Columbia Heights listserv last night. “Today, someone responded.”

Orvetti attached to his e-mail a photo of a second flier, posted yesterday, that seems to take issue with the first.

“I didn’t poison the f—–g cats,” reads the second flyer. “I wouldn’t waste the gravy.”

Orvetti told Borderstan this morning he isn’t sure who posted either fliers and that he hasn’t yet seen any gravy-covered poison.

“I’m not really sure what the response poster was getting at,” he said in an e-mail.

D.C. police say they have not yet received any complaints of gravy-covered poison in the area.