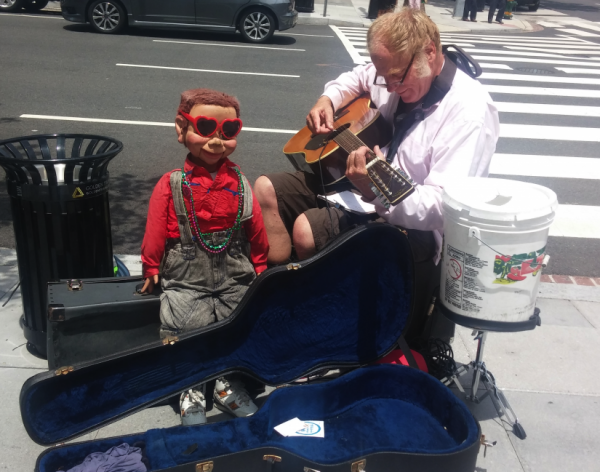 While wandering around downtown or near Dupont Circle you might catch a glimpse of a puppet in a red shirt and a man playing guitar.

Gordy Walck is the man with the guitar.

The puppet in sunglasses is Miles.

On a Tuesday afternoon, Walck sits with Miles on the corner of 18th and M streets NW.

Walck’s shoulders and mouth are pointed at the ground. He sways as his fingers strum a guitar.

Miles, Walck’s knee-height companion, sits next to him on a bench. While Walck sways and sings, his partner’s wooden lips and eyebrows move with the words.

“He had a hundred dollar price tag on him and I thought, ‘you know what, I’m gonna try that [and] see if I can make this work,” Walck says about the first time he “met” Miles.

It wasn’t ventriloquism that brought the 62 year-old Gordy to D.C. from Seattle, Washington to D.C. in 1992. Asking Gordy what exactly drew him to the city elicits a groan.

It’s unclear what kind of change Walck wanted to make, but he’s brought smiles to people downtown over the years.

Watching him on a sunny Tuesday, a few men in suits smirk at Miles before continuing on their way. Walck’s open, velvet guitar case only has a few dollars in it. He says making a living as a street performer isn’t as lucrative as it used to be.

More people carry credit cards now, and that means Walck is often met with an audience fumbling for change in their pockets and coming up empty, he says.

Walck says he could easily earn thousands of dollars on the street when he started out. Now, times are a bit tougher and it’s not just the city’s love for credit cards.

“Some towns respond differently to different things,” Walck says. “A friend of mine who’s traveled the world said that ‘if you had this act in Chicago, New York, Manhattan something like that,’ he says it would really go.”

That’s because art is treated differently in D.C. and a higher level of sophistication is much more appreciated, Walck says.

“Some of these players have instruments that are not something you’d commonly see on the street and they do quite well,” he says.

But for a ventriloquist like Walck, times are tough.

He lost his house in Mount Pleasant almost a year ago, partly because two defective amplifiers left him down $4,000.

“It was a great place to live, the neighborhood was calm, there was no crime there,” Walck recalls.

Now, Walck says he doesn’t have a roof over his head.

Losing the amplifiers meant less income, and less income meant Walck had to dip into his savings to keep Miles in working condition.

Rather than sleeping, Walck says he spends time keeping his equipment in working order — and keeping it charged.

“When someone’s indoors then they can plug in to charge and get [some] sleep,” says Walck. “In my case, I have to kind of catch it as I can, charge it at a location or an outlet and then I have to stay awake so it doesn’t get stolen,” he says.

But in the end, it’s worth it to find a sense of purpose, Walck says.

“I give the world a little bit of levity and lightheartedness,” says Walck. “That’s my intention.”