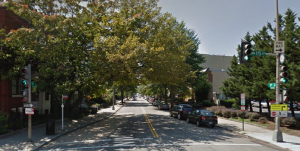 Two assailants struck a woman with a gun during a robbery that occurred on P Street NW on Sunday, say D.C. Police.

A woman was walking on the 1500 block of P Street NW around 1:05 a.m. when she was approached by a man from behind, say police. The man then flashed a black handgun and demanded the woman’s property. The woman fled in the direction of 16th Street NW, but a second man approached the woman from the front and pointed a gun at her.

One of the two men struck the woman in the face with his gun, say police, and the woman fell to the ground. The men then wrestled the woman’s property away from her, got into a black car and drove away.