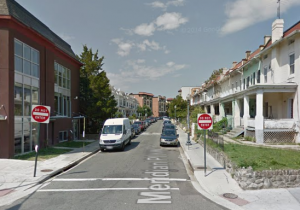 A man was robbed at gunpoint near the 1400 block of Meridian Place NW over the weekend, say D.C. Police.

Now, that man has come forward semi-anonymously to tell his side of the story.

The man, who goes by the handle First4Metallicalbums on Reddit, said in a private message exchange with Borderstan he was robbed by three men around 10 p.m. on Saturday.

“I walked outside my apartment, looking for my friend to arrive,” he says. “I am on the lookout for her on the street, and three people rushed me from the alleyway next to the apartment. It was very quiet and they didn’t make any [noise].”

The three people that rushed him were “skinny, probably around 5’7”,” he estimates. “[They looked] around 20 years old, wearing dark clothes, one of them probably had a bright orange shirt on.”

One of the men, says First4Metallicalbums, flashed a gun and pointed it in his direction.

“One is pointing a long [barreled] gun in front of me, saying to give him what I got,” he recalls. “The other two went through my pockets from behind [and] took everything I have, which wasn’t much. Just keys and phone. They both took off running in the alley, toward 14th Street.”

“Lesson here is that it can happen anywhere, anytime, and sometimes there is nothing you can do,” he said later in a post to the /r/WashingtonDC subreddit. “[I] wasn’t expecting it outside of my apartment. … Hopefully you won’t have to deal with this.”

Police say they have not made any arrests related to the crime.