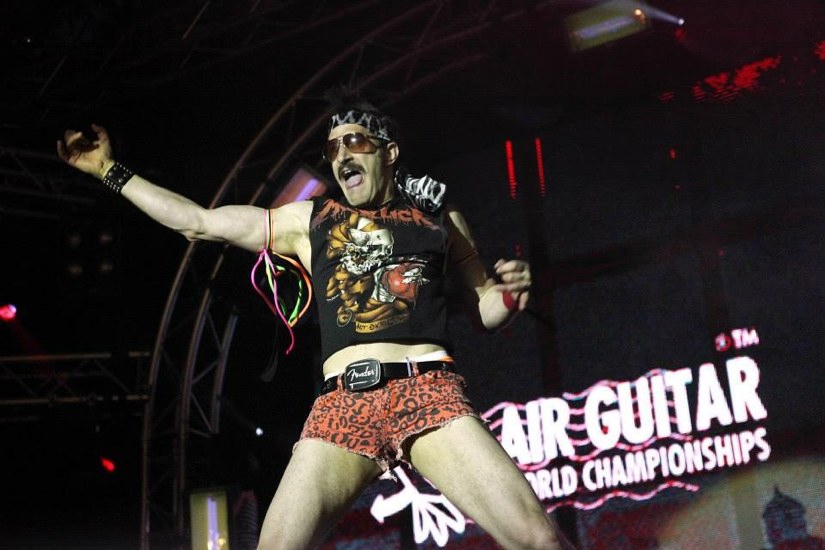 A D.C. man may have the chance to be crowned the greatest air guitarist in the world.

That man is Doug “Thunder” Stroock.

Last week, Stroock and three others strummed invisible guitars well enough to be awarded top honors in the Mid-Atlantic by a panel of judges at the 9:30 Club.

Next Saturday, they’ll compete in Portland, Ore., against 17 of the nation’s best faux-rockers for the chance to earn a spot among the air guitar gods.

Whoever wins will represent the U.S. in this year’s Air Guitar World Championships in Oulu, Finland.

Though he’s a tornado of ’80s fashion and creepy crotch-grabs onstage, Stroock is a fairly normal guy during his day-to-day life as a business consultant.

Stroock, who lives in Chinatown, says his persona is a “a sex figure that’s almost humorous.”

“I work out just enough to be in shape, but there’s no reason I should be kissing my bicep or pointing at it,” Stroock says. “It’s very opposite to my day-to-day persona. It’s like me, but a very outsized version of me.”

“I was not one of those guys who was rocking out to Metallica in my bedroom when I was 12,” he explains. “The theater of it is what drew me.”

Stroock says that although his routines change year-to-year, there’s always one constant: he’s going to rip off his shirt at some point.

“In every performance that I do, I know somewhere in there I am going to tear off my shirt,” says Stroock. “It’s my signature move.”

Will the overly macho moves and bare chest be enough to take home the world title? Stroock sure hopes so.

Until then: “I’m revisiting what my routine was and practicing,” Stroock says. “Definitely hitting the gym.”