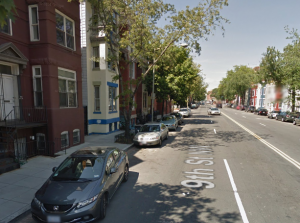 A man was arrested for attacking another man with a knife and a brick yesterday afternoon in Shaw, say D.C. Police.

According to police, James Jordan, 45, was arguing with another man near the 1800 block of 9th Street NW around 4:45 p.m. yesterday. The argument escalated when Jordan allegedly entered a nearby residence and came out wielding a knife.

Police say Jordan lunged at the man with the knife, but failed to injure him and fled on foot. The man then chased Jordan down the block, and during the chase, Jordan allegedly picked up a brick and hurled it at the man.

Police say they stopped and arrested Jordan near the end of the block.

The victim was treated by D.C. Fire and EMS authorities on the scene but was not transported to a hospital.

Information on Jordan’s lawyer was not immediately available.