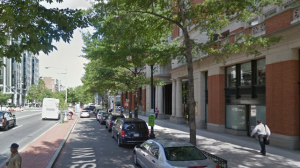 Police say three men were walking near their cars along the 1200 block of K Street NW at 2:45 a.m. when a silver SUV with three men inside pulled up alongside them. Two men inside the car drew guns — one a handgun, the other a rifle — and demanded the victims give them money.

The three victims then ran and the robbers broke into the victims’ vehicles and stole property, say police.

The suspects were last seen heading east on the 1200 block of K Street NW. Police are on the lookout for a car believed to be a silver Infiniti SUV.