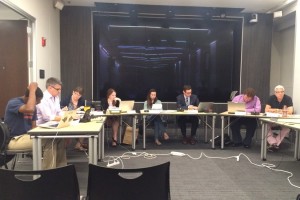 Residents who live near the Carlyle Hotel (1731 New Hampshire Avenue NW) gathered at last night’s ANC 2B meeting to debate and air grievances regarding a rooftop bar and kitchen proposed by the hotel and recently permitted by the D.C. Department of Consumer and Regulatory Affairs (DCRA).

Prior to the meeting, residents asked the ANC’s commissioners to vote on a measure to appeal the hotel’s building permit. Commissioners agreed to vote — citing in the appeal itself a belief that the Zoning Administrator “incorrectly applied the zoning regulations” — but stressed that the appeal would be a last-resort option.

“The point of this is that the neighbor’s concerns will be heard,” said Chairman Noah Smith, 2B-09. “We are not against having something on the roof,” he added. “But there are very serious and valid concerns about what was approved.”

Several residents then took the floor to speak their minds.

Rima Calderon, one of the residents who lives near the hotel, read from a statement.

“Section 411 of D.C.’s zoning regulations governs rooftop structures. Recreational-use penthouses are allowed only on apartment building rooftops,” she said. “DCRA issued a building permit for a penthouse at the Carlyle that authorizes restrooms, coat check, a bar, a kitchen-food preparation area, and storage. All accessory to commercial use of the roof deck. This is not allowed on hotel rooftops.”

Another resident, Ralston Cox, accused the hotel of misleading residents regarding its plans for the space. “We first saw the plans for this two years ago. … It showed two storage rooms,” he said. “We were surprised when the permit was issued because it shows not empty storage, but it shows a bar [and a] a catering kitchen.”

“To put what is basically a rooftop bar in the middle of a residential area is a big change for the neighborhood,” added Cox.

Other residents cited noise as their main concerns.

“The potential for a wildly increased noise level from crowds and amplified music … will change the nature of the family residential neighborhood,” said Tom Bower, former Dupont Circle Conservancy member.

And Steven Reichert, who lives directly behind the hotel, had more practical reasons for supporting the appeal.

“These 230-some people on the bar or restaurant or at a reception will be looking directly into our bathroom, into our bedroom and into our living room,” he said.

But not all residents were fully critical of the hotel. Bob Johns, who owns the condo below Reichert, praised the hotel’s new restaurant, The Riggsby.

“It’s nice to have a nice restaurant there,” added Johns. “I had dinner there last week. It was pretty darn good.”

But Johns stressed the need for more discussion.

“We need to have an honest, open dialogue about what’s going to happen on the roof, and we haven’t had that yet,” he said. “We desperately need for you all to be apart of this.”

Matt Wexler, who serves as part of the ownership team of The Carlyle, was in attendance to respond to residents’ concerns.

“I would dispute that we said that we would only be using the space for sunbathing and socializing,” he said. “We also had a series of dialogues in the fall of 2013 that we would love to have special events up on the roof, brunch and other services.”

“There are aspects of this ANC resolution that I saw for the first time this evening that I could quibble with, but that said, I would much rather advance the dialogue productively as I know commissioners have offered, and I look forward to doing just that,” he added.

Several commissioners at times seemed to question whether the hotel was clear in its intent to open a rooftop bar.

Commissioner Stephanie Maltz, 2B-03, cited a letter from the hotel to ABRA dated April 13 that seemed to show evidence that the hotel wasn’t entirely forthcoming with its plans. Maltz read from the letter: “No passive recreation area on the roof has been undertaken, we have not requested approval for a rooftop summer garden endorsement,” she read aloud.

“All that is true and remains true,” responded Wexler.

Commissioner Michael Upright, 2B-04, then said he remembers a hotel representative saying something similar in the past.

“This subject came up [before],” said Upright. “At that time, you said there were no plans for a roof deck. Numerous times. That was six or seven months ago.”

“I don’t want to dispute what I said,” responded Wexler. “I think I said there no immediate plans for the roof deck at that time and that we always considered the roof deck construction to be phase two of the renovation.”

Smith later put the resolution to appeal to a vote, which passed 7-0-0.

“Best case scenario is that we’re able to drop the appeal and everyone goes away 75 percent happy,” Smith said.

“If that’s the case, and we’re actually successful, and then they apply for an alcohol license, the theory is that the majority of the questions and concerns will have already been addressed.”