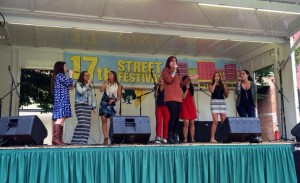 Local art, live music and activities for kids and pets will take over a stretch of 17th Street NW near Dupont Circle on Sept. 12 for the sixth 17th Street Festival.

The festival, which runs from noon to 6 p.m., will be similar to previous years’ festivals and will include more than 50 local artists and special zones for kids and pets.

Artists and other vendors will set up on 17th Street between P and R streets NW. Most of the vendor spots have been filled but submissions to fill the few remaining spots will be accepted until Friday.

Lee Granados, founder and co-chair of the festival, says that the festival tries to have a wide variety of art styles represented.

“We really try to push the envelope a little bit and bring in a pretty extensive variety to touch a lot of interests,” Granados said. “We have our typical traditional paintings and photography, but some of the applications I’ve seen have been for comic book graphic designers and some computer-generated work. There’s definitely a range from very contemporary to very traditional artists.”

While their parents peruse the art, children can enjoy storytelling, moon-bounces and other activities in the “kids zone” located at Stead Park on P Street. There will also be a “pet zone” sponsored by Dupont pet boutique The Cheeky Puppy.

Organizers are still finalizing entertainment for the main stage, but Granados says the festival plans to continue its annual tradition of including performances by local drag queens in the day’s entertainment. Several high-profile LGBT organizations have signed on as sponsors of the festival, including Capitol Pride and the Washington Blade newspaper.

Granados says she is also working with businesses around 17th Street to incorporate them into the celebration. The festival, which is put on by Historic Dupont Circle Main Streets, has a policy of excluding any vendors who might compete directly with area businesses.

“We have something for everyone and we hope that people come and enjoy a variety of entertainment and vendors and learn about some of the nonprofits in this area,” Granados said. “We also hope that people will support our local businesses while they’re here.”