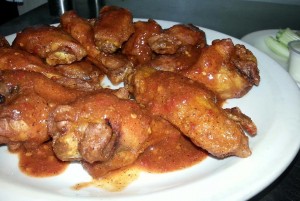 The famous wings at Duffy’s Irish Pub have an official comeback date.

The wing feast will double as a Nationals viewing party, and patrons will be able to watch the Nationals take play the Miami Marlins on the pub’s newly installed televisions.

“This is kind of an initial welcome back between us and the neighborhood,” said former Duffy’s owner and current general manager Andy Duffy. “It’s a fun event to get the neighborhood back involved and re-meet our neighbors.”

But it won’t be just like old times. The pub will not serve alcohol at the wing feast due to an in-process liquor license. But Duffy said he expects to receive the liquor license and open start pouring beers later in the month.

The pub made headlines last week when Duffy announced its re-opening.

Duffy said excited neighbors have already stopped by the pub as he has been preparing for the reopening.

“A guy came by yesterday with his kid in a stroller and looked in the window, then 10 minutes later he came back with a six-pack of Guinness to welcome us back,” Duffy said. “We’ve had stuff like that happening all week.”