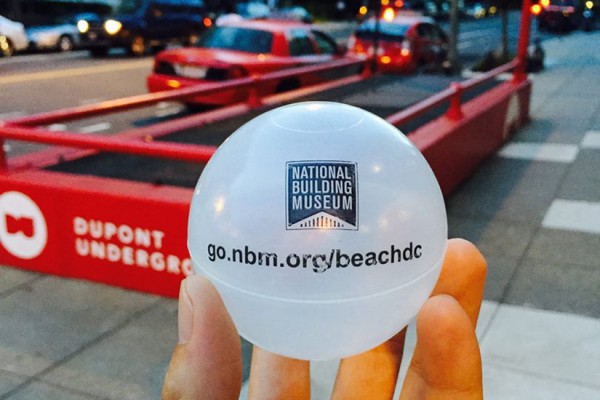 Dupont Underground is seeking at least 325 volunteers to help move hundreds of thousands of plastic balls from the National Building Museum to its underground art space in Dupont Circle next week.

The arts space announced last week it planned to take possession of the 650,000 plastic balls that made up part of the National Building Museum’s popular “The Beach” exhibit and repurpose them in an upcoming art competition.

Volunteers will gather at the Building Museum (401 F St. NW) next Monday at 4:30 p.m. to spend the evening packing the plastic balls into boxes and loading them into a moving vehicle. Another team of volunteers will be on hand at Dupont Underground’s entrance near Dupont Circle to form a human conveyor belt and unload and store the balls. Other teams of volunteers will then repeat the process all day on Tuesday.

“We have 48 hours until close of business on Wednesday to move the balls,” said Dupont Underground director Braulio Agnese.

How quickly will the move go? That depends on the volunteers, said Agnese. Though the boxes of balls don’t weigh much, there are a lot of them to move; 1,400 to be exact.

“The more people who help, the faster things will go,” he said. “At the building museum, it’ll be constant motion. At the Dupont Underground, it’ll be waiting for the trucks to arrive and then getting them into the space.”

“Fingers crossed, no rain,” Agnese said. “But the move will still happen even if it rains. It’ll get done one way or another,” added Agnese.

Agnese’s goal is to accomplish the entire move by Tuesday night, if possible. “But we still have Wednesday,” he noted. “It’ll all get moved.”