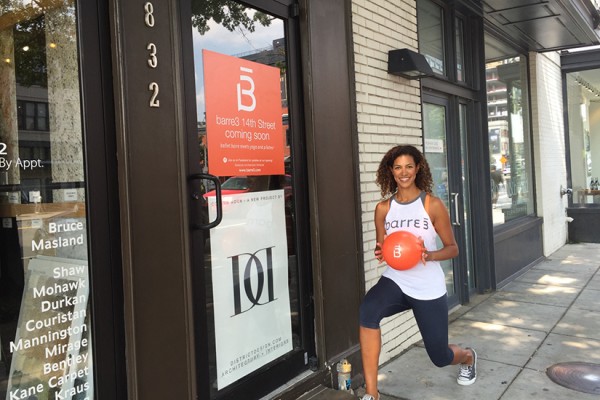 A national fitness studio chain is coming to 14th Street.

The studio, which will open under the barre3 banner, is set to arrive at 1832 14th St. NW in the two floors above Floors on 14th early next year.

Barre3 is a national fitness studio brand that blends yoga, pilates and ballet barre workout styles. The company was founded seven years ago in Portland, Ore., and has grown to have more than 75 locations across the country.

The fitness company has one location in Georgetown, but owner Alicia Sokol says her forthcoming studio is one of two more barre3 studios currently being developed in the District. The other is planned 2nd Street near Union Station.

The building’s second and third floors will be home to two studio rooms, changing rooms and childcare during classes, a service that costs $5.

“Just walking into the studio, you feel lighter,” she said. “It’s clean, sleek and comfortable and the people are so friendly.”

Classes are an hour long and include strength training and low-impact cardio exercises.

“I love how the workouts are individualized and can be modified for the specific needs of a client,” she said. “It’s all about turning your thoughts, focusing on your own body and making it work.”

The studio will be open seven days a week and offer membership and walk-in packages.

Sokol’s first experience with barre3 was as a client at the company’s Georgetown location. Shortly after, she was approached about becoming an instructor, a position she held for the last two years. As she began teaching more classes each week, she decided to bring her work to D.C. and take on barre3 full time.

“I walked into the space and fell in love,” Sokol explained. “It seemed kind of meant to be, with the original exposed bricks and windows that give so much natural lighting. I’m so excited about it.”