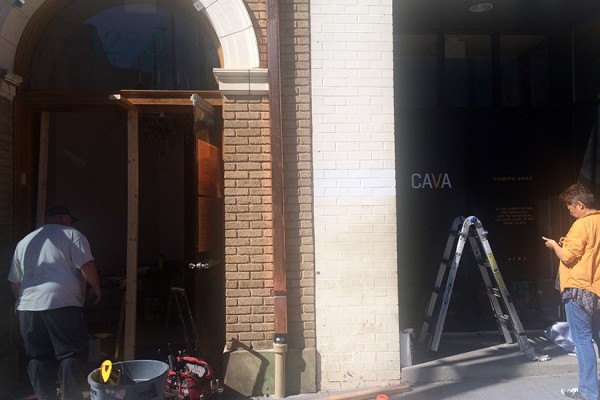 The “rare bourbon” bar planned to open in Dupont Circle now has a name.

A public hearing notice posting from last week shows the bar, which seeks to open in the former Bertucci’s Restaurant space at 1220 Connecticut Avenue NW, will be called “Saint Yves.”

The space will be shared with a Cava Grill, reported Washington City Paper yesterday. Workers could be seen renovating the space earlier this morning.

ANC 2B’s commissioners discussed the forthcoming bar and its application for a tavern liquor license during a monthly meeting on Wednesday.

According to that application, the bar would serve “light fare” alongside “rare bourbons” in a space with seating for 30 and a total occupancy of 250. The bar would also host occasional events with DJs and bands.

“It’s going to be an open space,” said 2B-05 Commissioner Abigail Nichols, who met with the owners of the bar earlier this month. “It’s really not designed for eating at all. They’re planning to have food but a very simple, more hors d’oeuvres-style menu.”

In a procedure most often used to reach a settlement agreement, the ANC voted 6-0-0 to protest the bar’s liquor license application on the basis of peace, order and quiet.