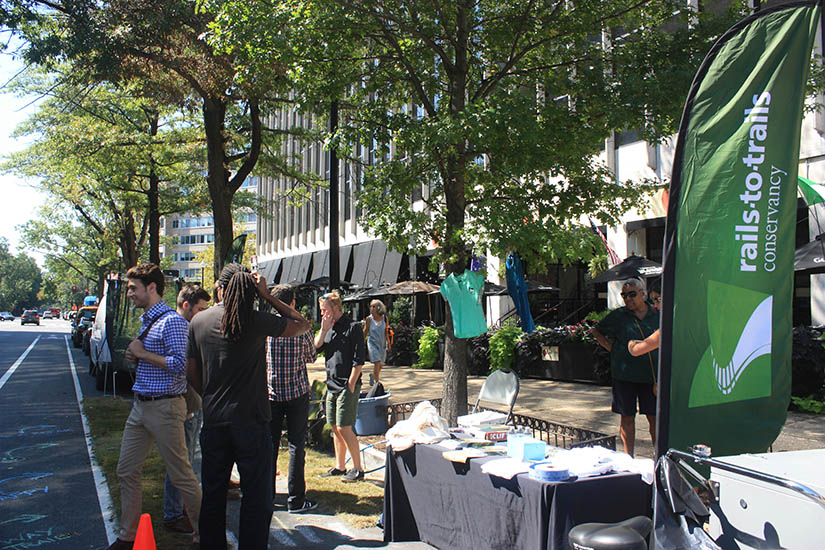 Parking spots across the District today were converted into miniature parks for D.C. PARK(ing) Day, but few of the tiny parks had room for a bike path like the one set up by Rails to Trails Conservancy on New Hampshire Avenue NW near Dupont Circle.

The Conservancy, a national organization that advocates for bike and walking trails, built the parklet in two parking spaces at 1300 New Hampshire Ave. NW, near their Dupont Circle offices. The parklet, which features a roughly 20-foot-long “bike path” lined with real sod, is part of the conservancy’s effort to advocate for “active transportation,” including biking, walking and skateboarding.

Milo Bateman, the conservancy’s manager of membership operation, said that turnout to the small park was good. The organization gave out free t-shirts, bike accessories, pedometers and popsicles to all who showed up.

Amy Kapp, the editor-in-chief of Rails to Trails’ quarterly magazine said that people weren’t only turning out for the free goodies.

“Everyone has been really interested in what we do,” she said. “It feels good that people are asking about our overall mission and where trails are located.”

Kapp also said that a lot of visitors to the “parklet” talked about their desire for more protected bike lanes in the city.