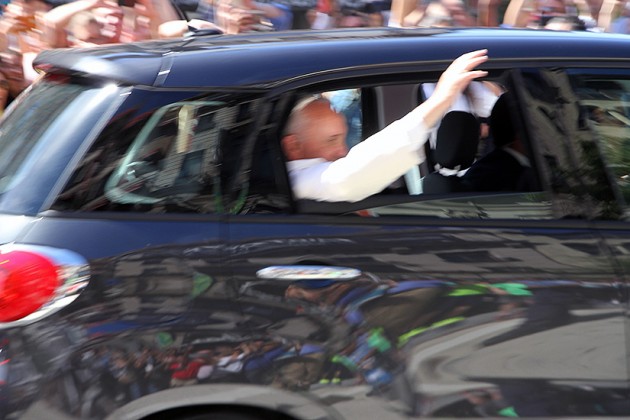 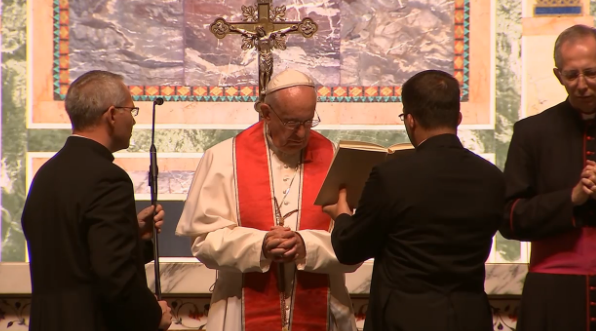 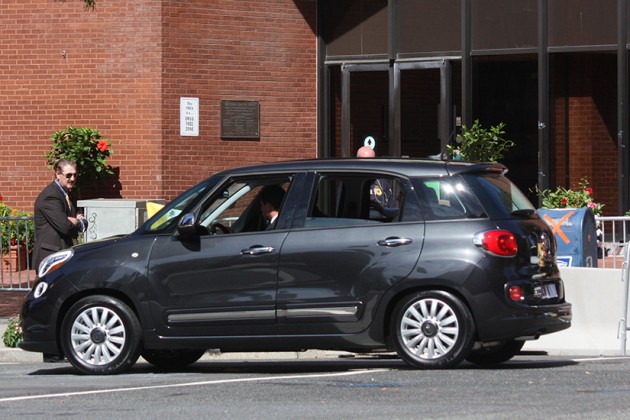 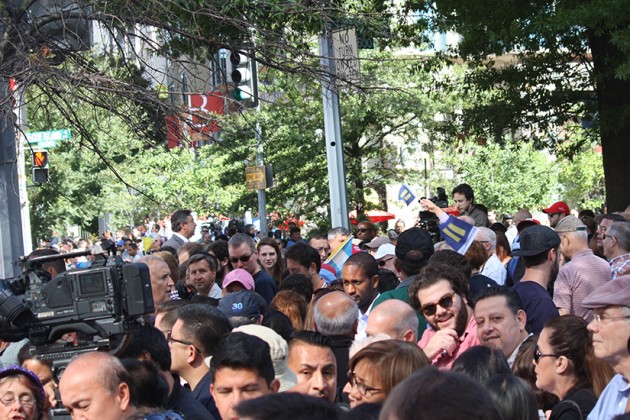 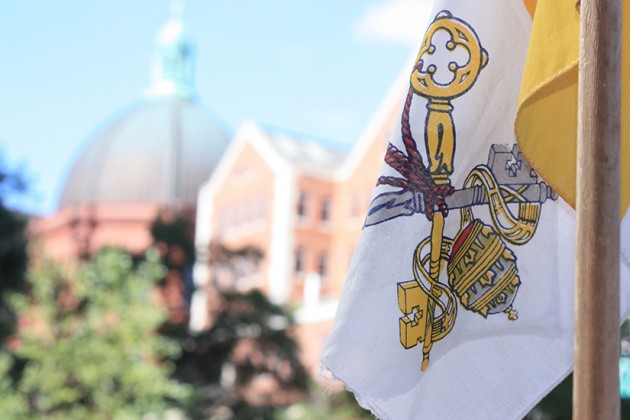 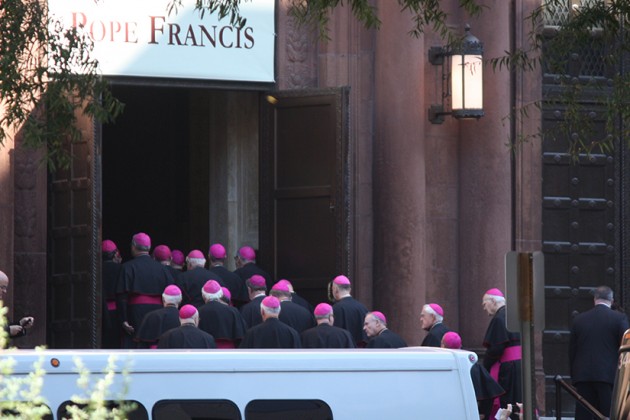 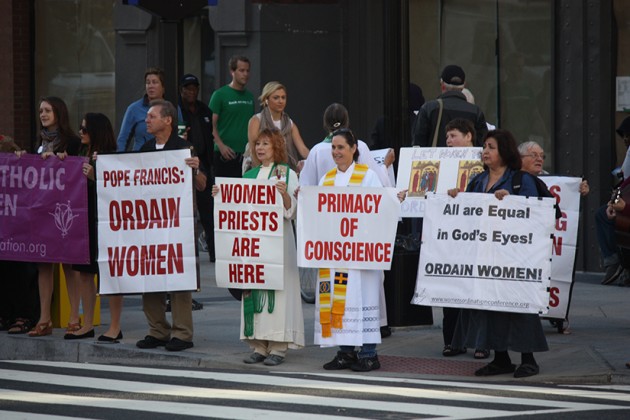 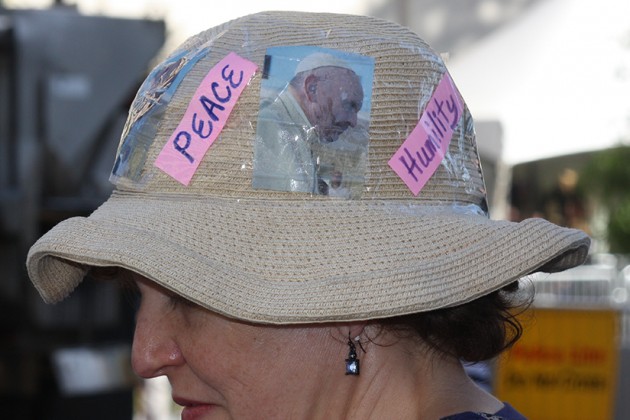 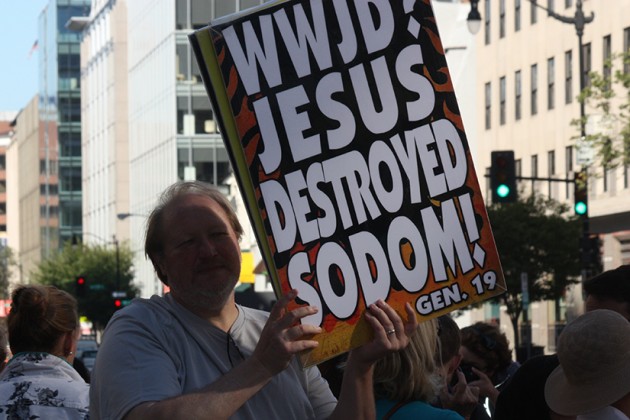 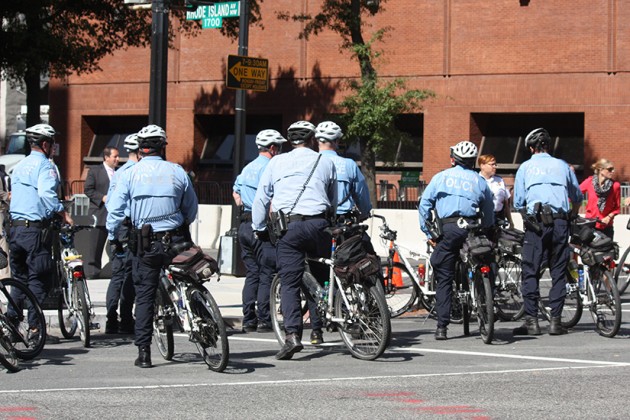 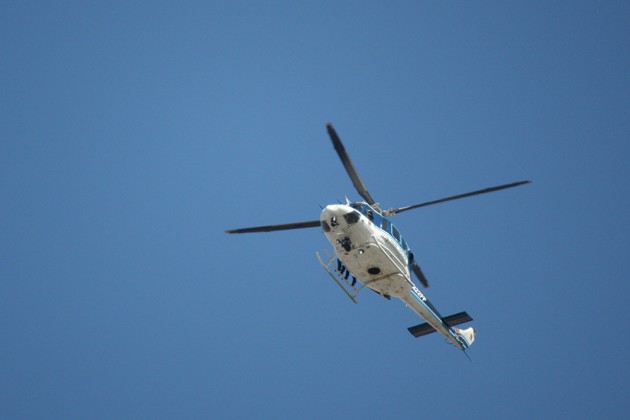 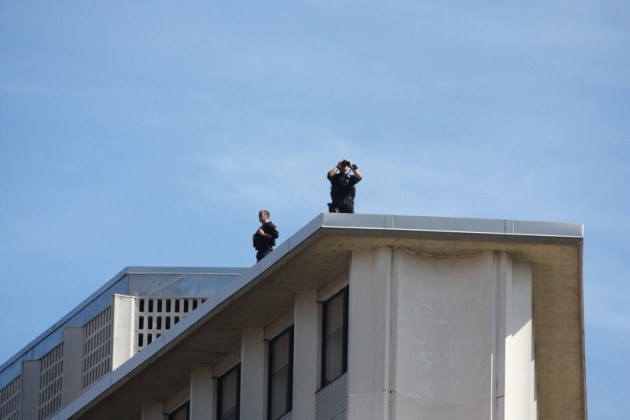 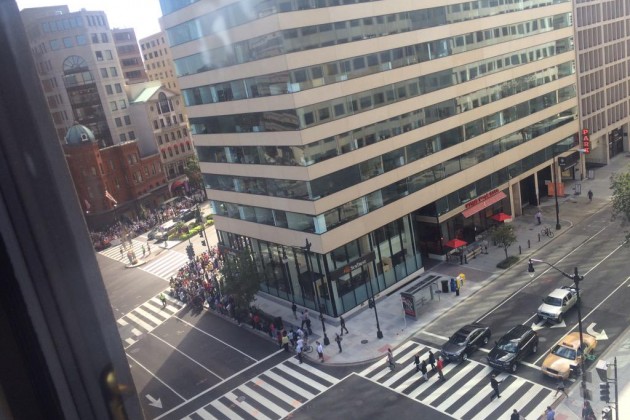 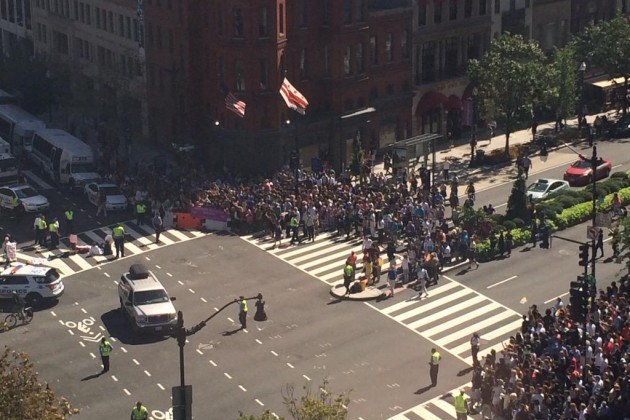 Police corralled the crowd to the side of the street. Songs were sung. People clapped. Many were excited to catch a glimpse of His Holiness.

Police closed off the entire block of Rhode Island Avenue NW, so onlookers gathered along M Street NW and 17th Street Northwest to catch a glimpse of the pope as he drove by in his trademark Fiat.

Laura Fisher, 55, and her mother Francis, 90, arrived just after 6 a.m., five hours before the pope’s arrival, to make sure they could get a good view. The two chose to come to St. Matthews instead of the parade near the White House because the church carries special importance to them.

“We always came to church here when I was younger,” Laura said. “We weren’t planning on battling the crowds at the Mall.”

Another group that arrived before sunrise were the Women’s Ordination Conference, a group that advocates for female priests in the Catholic church.

Standing behind a banner saying that “God made men and women equal,” Women’s Ordination Conference co-chairwoman Kat McElwee said that they are hopeful that Pope Francis will take their message to heart.

“You have to be hopeful,” said McElwee, who came from Rome to participate in the group’s multiple demonstrations during the pope’s American visit. “Francis has shows that he’s a man of conversion and open to change, so we’re elevating stories of women and we believe the message will resonate with him.”

Some protestors representing a different women-as-priests movement were later arrested for laying down in and blocking the street, reported WUSA 9.

Dignity Washington, the local chapter of a national organization for LGBT Catholics also staged a demonstration, holding a banner that read “The spirit speaks through us,” in front of the Human Rights Campaign office on 17th Street NW and Rhode Island Avenue NW. Dignity Washington member Larry Ranley, 60, said that the group was hoping to spread their message with the pope, not to directly protest him.

“It’s a gentle protest,” Ranley said. “Our message is that the spirit is speaking through us, and some of the church hierarchy would argue the opposite, but I have no doubt that the spirit speaks through us. When you’re a practicing Catholic despite the condemnation it almost has to be the spirit.”

But not all the protests were so gentle. Members of the Westboro Baptist Church picketed the event with their usual provocative and vulgar signs, and several anti-abortion trucks decked out with images of bloody fetuses drove past to a chorus of boos.

“That ruined my lunch,” remarked an onlooker in disgust.

Despite these moments, most people gathered were happy to have the chance to see the pope, even if it was only for a brief moment as he stepped out of his Fiat and into the cathedral.

Many people in the crowd discussed how they thought the pope’s visit was a blessing. Veronica Cummings, 35, who is moving this weekend from Mount Pleasant to California, said she saw the visit as a blessing on her life changing.

“There’s something about being here with all these strangers all here for the same purpose,” she said. “I choose to interpret his presence as a blessing on my upcoming move. I’m not religious and certainly not Catholic, but I respect religion for the faith and hope that it inspires in people and I’m hoping this visit is a blessing not only in my personal life but for the whole country.”

more stories
Previous
Man Filmed in Connection With Knife Assault on U Street
Next
D.C. Councilmember Nadeau to Lead Safety Walk Next Week