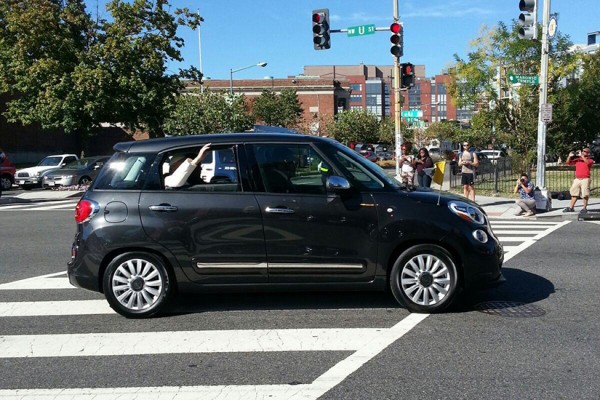 His Holiness was spotted cruising down U Street in his trademark Fiat earlier this afternoon. Was the pope hungry for a U Street taco? It’s unclear. What is clear, however, is that his appearance came as a surprise to many.

“We thought it was a bank robbery or something,” said Andre Esser, who owns U Scoot at the corner of Vermont Avenue and U Street NW. “They were yelling at a guy to get out of a van, all these cops.”

“Next thing we know, the pope comes driving by in a Fiat,” Esser added.

Esser said that although police presence had been heavy around the area all day, officers only started to block off the street five minutes before the pope’s arrival. And then: pope.

“I was actually getting ready to leave,” said Esser. “And as I’m leaving, I’m like… there’s the pope coming by. It was a huge surprise.”

“It almost looked as if he was blessing my business,” he added. “I was going to put that on my Facebook, the pope just blessed my business.”

Photo and video courtesy of U Scoot