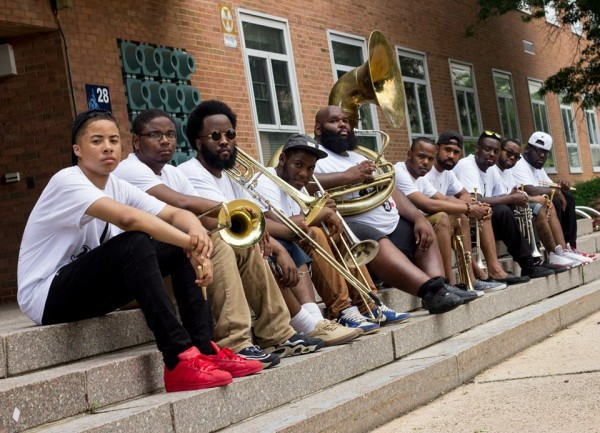 Morning commutes might be a little quieter for a while: The well-known public performers behind DuPont Brass are moving on from busking to become a “professional ensemble.”

The band shared the bittersweet news with its fans over the weekend.

“We are no longer the DuPont Brass that started out at Dupont Circle in the winter of 2011,” read an e-mail from the group. “With our brand continuing to grow and our members wrapping up their perspective degrees, we’ve decided to stray from busking and focus on developing ourselves as a performance group/service.”

DuPont Brass will play a “send-off show” for its fans tomorrow at the Marion Street Intergenerational Community Garden in Shaw at 2 p.m.

Flugelhorn and trumpet player Jared Bailey said his bandmates are looking forward to giving up early mornings and lugging heavy instruments onto the train.

“Doing it every day is very draining,” Bailey said. “As far as doing other things, we’re definitely ready for that.”

Bailey added the main reason for quitting busking was that the group — made up of mostly Howard University students — was on the verge of graduating. “We don’t want go out there and fool people that we’re raising for tuition,” he said.

Tomorrow’s show will be a blowout brass bash meant to celebrate the band’s four-year run as street performers.

“We’re trying to introduce people to our new sound,” Bailey said. “The send-off is meant to introduce them to the new sound that we’ve been working on.”

In addition to the usual brass and drums, tomorrow’s performance will pack the stage with a keyboard player, a guitarist and a second drummer. Expect the old arrangements and some new stuff, said Bailey.

“It’s probably something that you’ve heard before, but we’ve added to it to make it even better,” Bailey added.

The performance will also include other local performers, a food truck, live painting and an auction to kickstart the group’s professional career.

As for what’s next, Bailey said the band has some grand plans.

“We’re trying to raise money for a tour that we’re putting together that’s in the works, a college tour,” he said. “We’ll be going to colleges and putting on seminars.”

Bailey said he hopes his band can teach small ensembles across the country how to form their own DuPont Brass-like busking groups.

“Not just performing for them, but also showing them what we did to make it to where we are,” said Bailey. “That’s something we want to share for people, just how we did this.”