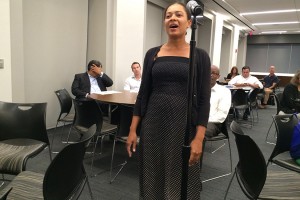 Residents Holly Biglow and John Kupcinski have entered into a race for former commissioner Justine Underhill’s 2B-07 seat, which was vacated in August when Underhill moved to New York City. Earlier this month, you heard from Kupcinski. Now, here’s your chance to hear from Biglow:

You previously thought about running for this seat, didn’t you?

When Justine [Underhill] ran, I was also interested, but I met and I spoke to her and I didn’t go through with getting signatures or anything like that.

So you didn’t run, but you were thinking about it.

Exactly. I was just interested, but I met with her and she was very passionate about it, so I sort of stepped back.

I know the St. Thomas Church project is a very large project. It’s very important to the community, so that will be the number one issue that will have to be addressed.

After that, I would like to work closely or continue to work with the surrounding businesses, such as the restaurants. I know there’s a lot more competition in D.C., which is driving a lot of patrons to go to different parts of D.C. I want to try to keep our area vibrant and as active as it currently it. I would definitely like to work more to try to keep the businesses in our area.

I think congestion will be addressed eventually. Traffic congestion. I’m not sure about people congestion, but I know that is a concern, especially considering the St. Thomas street project and some of the other condos that are being developed in the neighborhood, such as the Patterson House. That’s one of the things I would definitely like to keep an eye out on.

In what ways would you work with the businesses to keep patrons here?

I know that normally the businesses come to the ANC to get approval on their patios or what they can and can’t do in terms of their liquor license, or can they play music or not? I think just sort of working in that regard and being open-minded and looking in a business sense to make sure that I’m helping them to thrive and keep customers coming into our neighborhood.

I do know that the ANC scope is limited, but when they approach the ANC with things they might want to do to boost their business, instead of saying no, [I want to] look at it more like, we do want to keep people coming into the neighborhood, how can we work together and keep the neighborhood thriving?

Like I said in my speech at the last ANC meeting, I’m a very open-minded person. I like working with different organizations and coalitions. That would continue with any association if I were elected to the ANC.

How would you use social media to engage with your potential future constituents?

Nothing that I can pinpoint right now. But I feel like the commissioners are easy to work with and they’re very nice people. I’m sure if something did come about, they would probably consider my suggestions if there’s anything that I think would need to be changed. The meetings run pretty smoothly.

This interview was edited for length and clarity