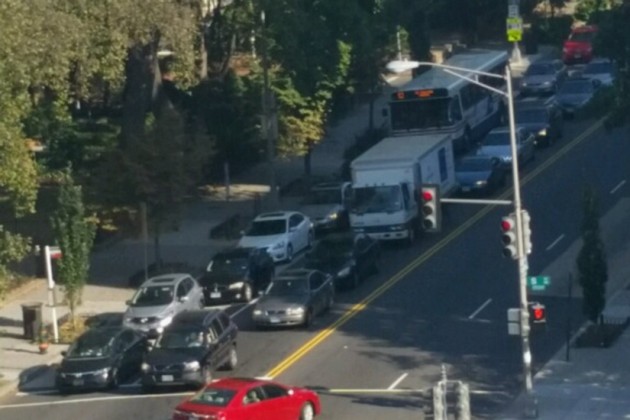 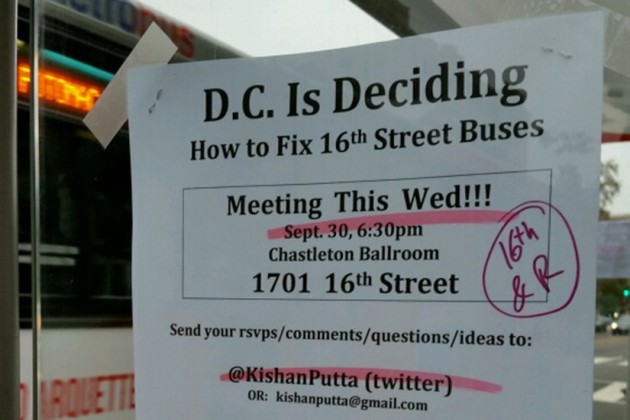 Kishan Putta is a former ANC Commissioner and current Vice President of Friends of Stead Park. He can be reached at [email protected] and @kishanputta on Twitter.

This past March, after years of public outcry about slow and off-schedule buses, the District’s Department of Transportation (DDOT) started a lengthy study and community outreach process.

The second-to-last public meeting will take place at The Chastleton (1701 16th Street NW) this Wednesday 6:30-8:00p.m. DDOT will also hold pop-up feedback sessions along 16th Street NW over the next few weeks and will host another feedback meeting before the end of the year followed by a presentation of the preferred alternative in January.

If you ever use the 16th Street buses, drive 16th or just care about improving this vital corridor of the city, please join us on Wednesday.

My wife and I live in the Chastleton, which overlooks 16th Street, and can see the problems daily. When I was an ANC 2B Commissioner, I helped get us more and longer buses, as well as a new rush-hour route. As a member of DDOT’s Citizens Advisory Group, I’ve participated in three public meetings this year and have heard from scores of riders and drivers.

Morning rush hour tends to be the biggest concern for riders I’ve talked to. Riders feel that rush hour has gotten longer and longer. Though it used to end shortly after 9 a.m., they tell me, rush how now extends till 10 a.m. and beyond. They feel that buses, which carry over 50 people each, should be able to travel quicker during rush hour than they currently do and spend less time stopping.

DDOT has spent the spring and summer collecting data and are seeking input into what their final contending alternatives should be. Each alternative will be a combination of infrastructure, traffic, and bus route changes.

Other cities in the U.S. and abroad have implemented time-saving ideas like ride prepayment and backdoor boarding to reduce stoppage times, as well as bus-sensitive traffic lights that stay green longer if they sense a bus approaching. They also have bus-only lanes, an idea that many riders would like to see tried on 16th Street, if only just a pilot test.

From our apartment overlooking 16th Street, I’ve taken hundreds of photos and videos of the traffic problems. I’m no expert and I haven’t collected official data. But these photos and videos, taken recently, show a few things.

16th Street is 50 feet wide. Sometimes, that 50 feet gets divided into four or five lanes. Many have suggested that we should have more five-lane sections (especially south of W Street) so cars would have more options, and so buses could be left to have the right lane. Perhaps we could solve the problem by way of an official dedicated bus lane with enforcement done via cameras mounted on the backs of buses. This would ideally allow buses full of passengers to get downtown faster and then be reused.

There are many more proposals DDOT is considering, such as moving or removing certain bus stops, and changing some routes. Please let us know if you have other ideas, and please send questions and comments to [email protected] or tweet @kishanputta, @DDOTDC and use the hashtag #16thStreetBus.

We have talked and advocated for years about improving this corridor. We finally have the opportunity to do so and we appreciate DDOT’s outreach and thoughtful efforts.

We hope you will give us your input and will attend the meeting Wednesday.