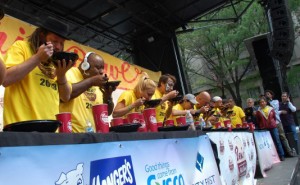 Plenty of people love the chili at Ben’s Chili Bowl, but few love it enough to eat nearly two gallons in six minutes.

That’s what it might take to win the fifth annual World Chili Eating Championship — and the $1,750 first place prize that comes with it — at the Taste of D.C. festival on Oct. 10.

The chili-eating competition will kick off on Pennsylvania Avenue NW between 3rd and 7th streets NW at 3 p.m. The contest will be held on the main stage at the center of the festival.

Professional competitive eaters from around the country will compete to unseat reigning champion Joey “Jaws” Chestnut, who won last year by scarfing down 1.87 gallons of chili in six minutes.

Chestnut, of course, is kind of famous for eating a lot. The eating machine won eight consecutive Nathan’s Hot Dog Eating Contests between 2007 and 2014, and is currently ranked second in the Major League Eating world rankings, which is apparently a real thing.

Two local competitive eaters in the top 10 of the world rankings, fourth-ranked Sonya Thomas of Alexandria and ninth-ranked Juliet Lee of Germantown will also compete for the title of best chili eater.

There will be a second, amateur chili eating contest for members of the armed services at 4:30 p.m. Participants, who can register online until Oct. 5, will represent their branch of the military, proving once and for all which branch has the biggest appetite.