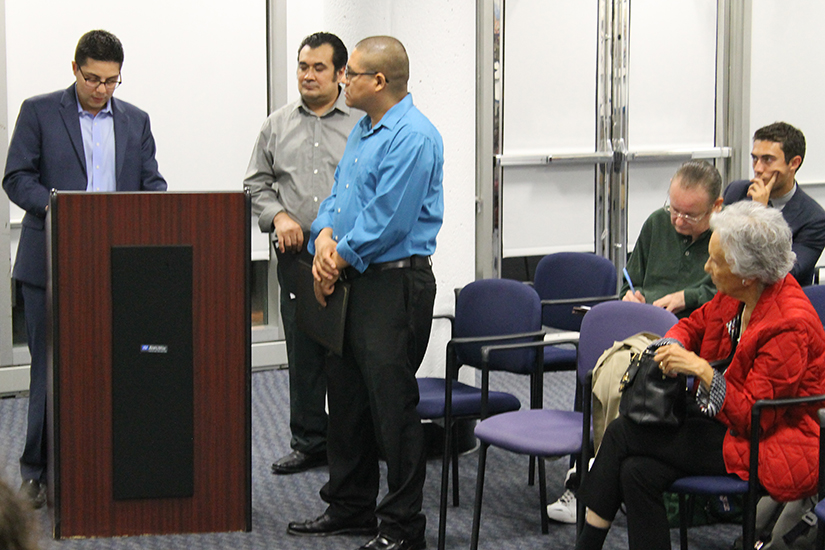 Community leaders from ANC 1B honored two Ben’s Chili Bowl cooks last night for saving a man during a violent mugging that occurred in an alley near the restaurant in June.

With Ben’s owner Virginia Ali in the audience, Commissioner John Green, 1B-12, presented the commission’s community heroes award to Carrosco and Contreras during the ANC’s monthly meeting at the Reeves Center.

“There was a man … who was being mugged, violently beaten, by two individuals behind Ben’s Chili Bowl, and these gentlemen stepped in and prevented the crime from becoming much worse,” Green said from the podium.

Green then read a letter addressed from the victim to his saviors.

“Words cannot possibly express my gratitude to the two of you, despite being complete strangers to me,” Lance wrote in the letter.

“I remember grabbing my eye and then seeing blood, and then not being able to open my eye,” Lance continued. “As I looked up in the alley, hunched over, your silhouettes looked like the calvary coming to the rescue. My mother called you angels. At that moment, seeing the two of you running with your belts in the air, chasing the two cowardly thugs. I just remember thinking, thank God it’s over, and I’m okay.”

“These guys have my back,” Lance’s letter concluded. “It was one of the best moments of my life.”

Green read the letter in Spanish and presented copies to Carrosco and Contreras to a thundering round of applause.

Ali, who has previously called her employees “stars,” then spoke up. “Thank you very much,” she said. “I hope you don’t mind if we take them back to their duties,” she joked.