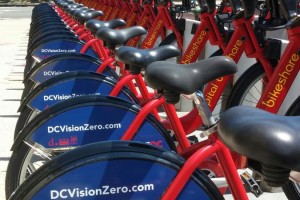 Capital Bikeshare bikes may become even more common as the District Department of Transportation plans to add 99 new bike stations and make some existing stations bigger over the next three years.

A plan released by DDOT on Tuesday aims to expand Bikeshare to underserved locations and increase service in areas where the service is already popular. Most of the Borderstan coverage area is within Bikeshare’s “core” area, where the service is already very popular. In the next year, the agency plans to expand some stations in the core area while also adding stations east of the river and in other places with few Bikeshare options.

The plan calls for several additional stations to be built in the next year around Columbia Heights and Logan Circle, two areas that already have high rates of Bikeshare use.

DDOT has already identified locations for some of the stations to be added in the next year, as well as 21 stations to be expanded. Ten of the expanded stations are within the Borderstan area:

Of the new stations that the agency plans to build in the Borderstan area in 2016, only one location has been announced, at 14th and Irving streets NW in Columbia Heights.

DDOT is seeking public input before finalizing the plan, and comments can be submitted online until Nov. 15.