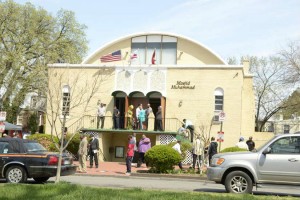 A mosque in Truxton Circle is warning its congregation of a possible anti-Islam rally taking place at the mosque tomorrow or Saturday.

The Masjid Muhammad mosque at 1519 4th St. NW was one of several mosques and Islamic community centers across the country warned by law enforcement of possible protests. The protests are being planned by a group calling itself Global Rally for Humanity, which argues that Islam presents a threat to all of humanity. The group had rallies scheduled for this weekend in 20 cities in the U.S.

The D.C. rally was scheduled to take place at Masjid Muhammad mosque Friday or Saturday, but the Facebook event for the rally has been deleted. Sultan Muhammad, a spokesperson for the mosque, said that he’s not sure if the rally will still be held, but are working with local and federal officials to bolster security in preparation for possible protests.

“The most recent update that I have to get clarified is that the list of sites where the protests are scheduled has diminished, but we don’t know which places,” Muhammad said this afternoon. “For us, we’re going to remain in heightened awareness in regards to the protest here.”

Earlier today, the mosque posted on its Facebook page warning that a demonstration could take place at any time on Friday or Saturday.

“Imam Talib SHareef and the MM Board of Advisors urge all members and visitors to avoid any contact and/or confrontation with these demonstrators,” the notice said. The post also acknowledged that the protestors will likely be trying to provoke a reaction from the congregants.

The Center for New Community, a Chicago-based organization that tracks racist and nativist movements in the U.S., and which has been monitoring the Rally for Humanity events, said on its website that a demonstration in the District is possible but not confirmed.

There is a separate anti-Muslim rally planned for the National Mall on Saturday as a counter to the rally commemorating the 20th anniversary of the 1995 Million Man March. More than 100 people have joined a Facebook event for that protest.

Muhammad said that the mosque has been contacted by many neighbors and other faith groups in the area offering any assistance with handling the protests. He added that whether or not there is a demonstration, the planned one gives members of the mosque congregation an opportunity to reflect on how to best approach anti-Islamic sentiment.

“In any event, these kind of situations always are a good education tool for our younger folks to see how we handle things in a less aggressive manner and good opportunities to teach people how to properly address these things,” he said.