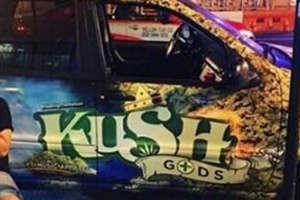 It’s been called “weed on wheels.”

Kush Gods, the District’s only large-scale mobile weed dispensary, is planning to expand its fleet of marijuana-decorated cars stocked with weed-laced brownies and candy. And despite the company’s questionably legal business model, its owner isn’t worried about police intervention.

On a typical night, a Kush Gods car can be found parked on U Street, 14th Street or in Shaw and Adams Morgan. The company lures potential customers with “kush girls,” who explain the business to curious passers-by. A transaction works like this: Drop money in a “donation box” and receive a free gift of weed-laced edibles.

Kush Gods owner Nyck Kush God — who changed his legal name when he started his business — said sales have soared since DCist and FOX 5 publicized the company earlier this week.

“It’s picked up a lot in the last couple days,” he said. “I would say we’re doing at least an extra 25 percent. It’s been great for us.”

The company currently has six employees, including the chefs that make the edibles. Kush God said he plans to hire four more people in the coming weeks as drivers and to work as kush girls. He added that he also plans to add to his fleet of bud-decorated cars but is not sure how many vehicles he wants to buy.

But let’s pause for a second. Though weed cultivation and ownership is legal in the District thanks to Initiative 71, sales are not. As marijuana activist organization DCMJ pointed out on Wednesday, taking money — in a donation box or otherwise — while doling out weed could count as a sale, no matter what you call it.

Still, Kush God said he wasn’t worried that his heightened notoriety would draw scrutiny from the police, who he added have let him carry out his business without any problems so far.

“It was a thought that crossed my mind, but knowing the laws and understanding them, I don’t think we’ll have any problem unless they try to change something,” he said. “As long as it’s legal to give it away, people can donate to whoever they want to donate to.”

Kush God also emphasized the fact that his company is not operating in the shadows.

“We’re not hiding, the vehicles are loud enough,” he said. “Law enforcement has been seeing us. You can’t not see it.”

He added that while he’s happy to distribute his edibles for recreational use, he does want people to realize that his products are not only used recreationally. The company’s slogan is “Healing the Nation,” which Kush God said applies not only to physical conditions and illnesses that can be helped with marijuana, but also to people’s state of mind.

“I think it’s a mental thing too,” he said. “It can change people’s mindset. It relieves a lot of stress and makes people more calm.”

more stories
Previous
What to Expect in Borderstan This Weekend (Oct. 9-11)
Next
Borderstan Brief