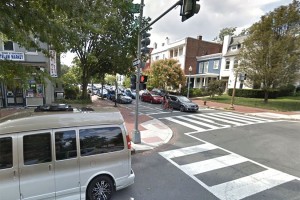 A woman was threatened with a knife after a pumpkin was thrown toward one of her dogs on a walk near the U Street corridor over the weekend, police said.

The encounter happened on the 1300 block of T Street NW about 2 a.m. Sunday. The area is about a block south of the U Street Metro station.

The victim was in the vicinity when a young man hurled the pumpkin toward her dog. “Are you serious?” the woman asked the man and his friends, who laughed, according to authorities.

A woman, who was one of the friends, then became “verbally aggressive,” police said. The friend told the dog walker that she has a knife and will “pull it on you,” according to authorities.

The friend then grabbed the knife from her bag, flashed it at the victim and left the scene.

Police didn’t release any description of the suspect. But officers whose district includes T Street arrested a person suspected of threatening someone with a knife Sunday morning. It wasn’t immediately clear if the arrest was connected to the pumpkin-hurling incident.

In addition to the stabbing in Dupont Circle Saturday night, a man was threatened with a gun in Columbia Heights over the weekend, police said.

The man was walking with someone near the convenience store when a person he knew and some other people started to follow them. The group then began to yell “possible gang-related slang” at the victim, according to authorities. Feeling uncomfortable, the man and his acquaintance went into the 7-Eleven.

The pair then were approached by the individual whom the victim knew, police said. That person said the victim was “gonna die” if he called police, according to authorities.

The individual making the threat then flashed a silver gun at the victim and left the store.

Police didn’t release any description of the suspect.