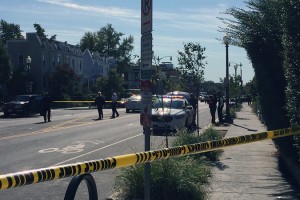 Police have arrested the man they say shot and killed 38-year-old Marcus Manor in his car near the border of Columbia Heights and Park View last week.

Information on Chase’s lawyer was not immediately available.

Police first received a report of gunshots on the 2900 block of Sherman Avenue NW at 11:10 a.m. last Wednesday. When they arrived, police said they found Manor unconscious. Manor, who police later said was shot in the chest, died on the scene.