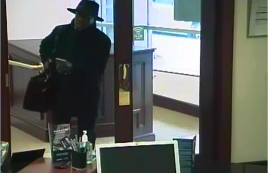 Police are on the lookout for a man suspected of robbing a bank downtown yesterday afternoon.

According to police, a man carrying a black briefcase and dressed in a black trench coat, black scarf and a black brim hat robbed the Capital One Bank at 901 New York Avenue NW around 3:43 p.m.

The Metropolitan Police Department currently offers a reward of up to$5,000 to anyone that provides information which leads to the arrest and conviction of the person or persons responsible for any bank robbery committed in the District of Columbia.