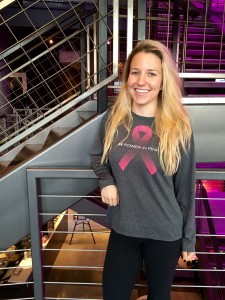 While the pink ribbon is easily recognizable, the fact that breast cancer can appear in anyone, regardless of age or health level is less well known.

VIDA member Jo was leading a healthy lifestyle as an NCAA athlete playing water polo at Occidental College in Los Angeles when she noticed a lump in her left breast. She brought it up with her doctor during a routine check-up at her school’s health center but was told it was probably nothing and to keep an eye on it. When the lump started getting bigger she got it checked out again and was this time referred to a local hospital.

After celebrating her 21st birthday in the Fall of 2010, Jo was informed that she had stage two breast cancer and would require immediate surgery and radiation to remove the tumor.

“I didn’t tell anyone at first. I was still in school and playing water polo full time, so I spent a lot of time just going back and forth from practice to the hospital. Not telling anyone made it feel not as ‘real’ for me, and I just focused on staying active to keep myself distracted,” says Jo.

She completed the surgery and radiation over winter break of her junior year, while still letting only a few people know about her diagnosis. Her “ignore it and it will go away” attitude apparently worked well, and she entered remission her senior year!

Jo successfully finished her undergrad in LA, and decided to continue her education at the Institute of World Politics graduate program, or what she calls ‘Spy School,’ here in DC. She made the move across the country in June 2013 and joined VIDA shortly after.

“I was looking for something that wasn’t just a bare bones gym. I loved the variety of locations and amenities VIDA had to offer,” she says.

She quickly fell back into a regular exercise routine here at VIDA, consisting of heavy lifting and cardio 5-6 times a week. She made a lot of new friends and was working on finishing up her Masters this past spring, when she says she started noticing that something didn’t feel right.

“Around February I started feeling like something was wrong. I couldn’t quite figure out what it was, but I wouldn’t let myself think that the cancer was back. Although, I kind of had a gut feeling that’s what it was” says Jo.

She went to see a new doctor in DC and began the long testing and retesting process. After four and half months of uncertainty, she was finally given a diagnosis. Her stage two cancer had returned, she would have to have another surgery and another round of radiation, and they needed to be scheduled right away. 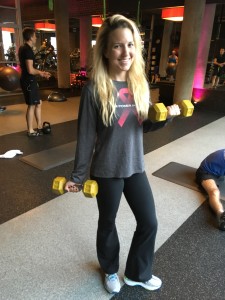 “I didn’t want to believe it at first. I didn’t handle it as well the second time around and wasn’t in a very good place mentally,” she explains. “I kept coming to VIDA and using my workouts as a distraction, telling myself ‘If I can still do this then I must be doing okay,’ but then I started losing too much weight,” she says.

Jo completed her second surgery and round of radiation over the summer and early fall, where the doctors were confident that they got it all. But despite the positive verdict from the doctors, Jo was having a tough time recovering physically and mentally from the toll the procedures took on her body.

“I had lost over 20 lbs and I felt so weak. I wanted to keep working out but I had lost so much weight I had to stop. I finally got to a point where I didn’t want to feel like that anymore and knew I needed to do something about it. My doctors recommended I see a nutritionist, so I called Alayna immediately and just unloaded,” she says.

Jo met with our Registered Dietitian Alayna Markwordt for the first time in August, and they immediately formulated a nutrition plan that would help Jo put the weight back on, build up her immune system and pack in the nutrients that Jo was missing from her diet.

“My first goal with Jo was to stop the unintentional weight loss. We found some creative ways to help her get the calories she needed in smaller amounts of food since she had lost most of her appetite. Smoothies with healthy ingredients worked really well!” says Alayna.

Jo purchased a 12-pack of nutrition consults with Alayna and began gradually returning to a healthier place, both mentally and physically.

“Alayna saved me.  I’ve started putting weight back on and am making healthier choices, which has allowed me to get back into my workouts. Having these resources at VIDA and someone to talk to made a huge difference – I feel like nutrition brought me back from the dead,” she explains.

As Jo’s health continued to improve, she got good news from the doctors too. All her post-treatment tests came back cancer-free with the verdict that it’s very unlikely to come back again. (yay!)

After going through two cancer scares, Jo says in certain ways she’s grateful for her experience, as it has pushed her to do things she’s always wanted to do.  These include training for the Disney Marathon in January, working on getting a bib at the Boston Marathon next year, and she even went skydiving last week! 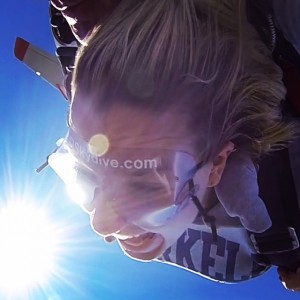 “I just want to push myself to take on challenges and do all the things I want to do. I fought this and I won, so I feel like if I can do this I can do anything!” says Jo with a smile.

Jo reminds me that she knows she is luckier than many people who are diagnosed with cancer, and she has dedicated her efforts to raising awareness and helping out others fighting the disease. She stresses the importance of remembering that it can happen to anyone – even those of us leading ultra-healthy lifestyles.

Jo has a message for other who may be fighting diseases and working towards leading a healthy, balanced life.

“You can’t let it consume you or let it be how you identify yourself. You have to control it or it will control you, so you can either sit there and feel bad for yourself or get up and do things that are good for you!” she says.

We are certainly impressed by Jo’s strength and positive outlook, and are lucky to have her as part of the VIDA family! If you’d like to help out breast cancer research, please visit Susan G. Komen’s website to make a donation.

Jo, thank you for sharing your inspiring story and we’ll see you at the VIDA Thrive 5k next month!

The preceding article was written and sponsored by VIDA Fitness.