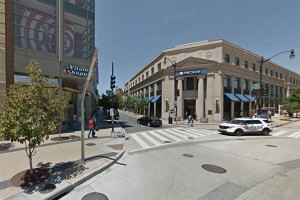 A man was stabbed in his back after a group of people approached him in Columbia Heights last night, police said.

The stabbing happened on the 1400 block of Park Road NW about 8 p.m. The area is just north of the DC USA retail development.

The victim was on a sidewalk in the area when three people went up to him from behind and stabbed him once in his lower back, according to authorities. The assailants then ran away.

The man brought himself to a local hospital for treatment.

A woman also was punched in the face and threatened with a knife by someone she knew in Park View yesterday afternoon, police said.

The incident occurred on the 400 block of Park Rod NW about 2:15 p.m. The area is about two blocks south of Bruce-Monroe Elementary School.

The victim had just left a friend’s home in the vicinity when she encountered the girlfriend of the home’s owner outside.

The girlfriend then punched the victim and pulled out a knife, threatening to “stab your big ass up,” according to authorities. The attacker then fled.