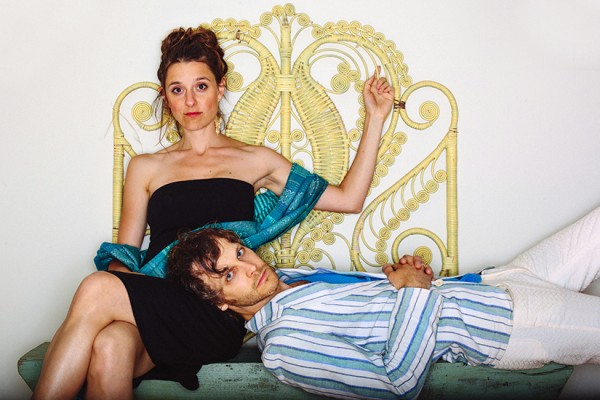 Mexo-Americana band David Wax Museum is pretty psyched to play U Street Music Hall on Nov. 21, but they’re definitely not above performing at a good house show. Though vocalists and instrumentalists David Wax and Susan “Suz” Slezak have roots in Boston, some of the duo’s fondest memories were forged during nights spent playing shows in D.C. living rooms.

We spoke with Wax earlier this week to preview the band’s upcoming show:

Borderstan: What are your expectations for U Street Music Hall?

David Wax: I think the sense I’ve got is that it’s like a little bit more of like a sweaty rock group than the 9:30 Club, which has a little bit of that kind of like majestic rock room feel. I think that to [perform in] a packed U Street Music Hall is going to feel really good.

Susan’s from Virginia, that’s where we live nowadays so we started coming to D.C. really early on and building up. One of the most unique ways of building up the band for us in terms of doing these 15 house concerts in D.C.

I feel like we’ve made a real personal connection with a lot of our fans there and [I] kind of really just won people over one person at a time and one living room at a time. There’s just a real special vibe when we play D.C. People who have got to see us from our earliest early stages have kind of grown along with the band.

Take me back to some of those house shows starting out. How did you get hooked up with them and what was your very first house show in D.C. like?

There was a guy I grew up with in Missouri who was living in D.C. and he organized the first one and he sat in with us. He was someone who played with us a lot when we were in D.C. And so he was kind of a real, you know, person that was super involved in community life there and was able to get 40 people together in a living room to see a band that nobody’s ever heard of.

It was kind of like a raucous party with 40 people in a room and a little house in D.C. and I think from that, three or four people that saw us there were like, oh, could you do this at my place? There was just like an instant like oh, I wanna have this at my house and have my friends come and see this.

And so it really like was this kind of viral thing that just something kind of resonated with people. And there was a high concentration of young people in their 20s that, you know, were connected and could get a bunch of people together. It really fit with what peoples’ interests were and there was just some kind of line that really clicked.

Has the comfort level changed now that you’re playing in actual music venues?

In some ways you’re almost more exposed than the house show setting. Both Susan and I have been really comfortable performing since we were little kids and that’s what really draws us to being in the band. One of the most sustaining parts of the stress is getting to perform every night. There’s lessons to be learned about what connected with people in the house concert setting and the feeling of community and intimacy that you have to work harder to create in the larger venue.

We’ve been in D.C. a couple times at the 9:30 Club where we just came out in the middle of the room and everyone sat down on the floor and I feel like we’ve been able to have that kind of intimacy in those experiences that feel like some kind of sense that there’s like a transcendence.

That’s why I play music and that’s why we go and hear music. That’s why live music is still relevant to people and matters in peoples’ lives.

This interview was edited for length and clarity. Photo by Todd Roeth.

more stories
Previous
Necktie Shop to Pop Up in Shaw for the Holiday Season
Next
Thief Orders Woman to Look Down, Snags iPhone in Logan Area