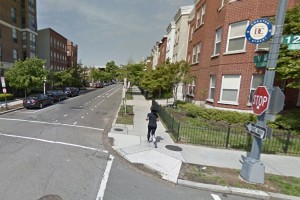 (Updated at 3:50 p.m.) Two men with a gun robbed a man and woman near the U Street corridor early yesterday morning, police said.

The victims were walking in the area when two men went up to them, according to authorities. One of the men who approached then flashed a revolver and ordered the victims to hand over some of their belongings.

The woman and the man who was with her complied. The thieves eventually fled with two iPhones, a purse and a wallet, among other items.

According to authorities, other crime that occurred in the Borderstan coverage area since Tuesday night, in addition to the bank robbery this morning, included:

Police today also released a video of three people wanted in connection with the destruction of property on the 1700 block of Harvard Street NW on Oct. 18.