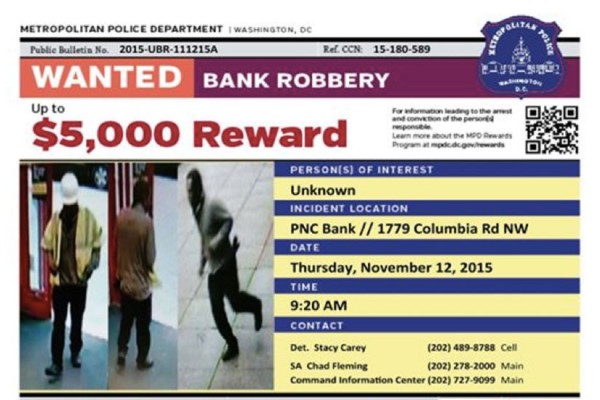 A man police arrested in connection with an Adams Morgan bank robbery yesterday isn’t the only person who may have played a role in the crime, Borderstan confirmed earlier this morning.

Authorities still are looking for a man they call a “person of interest” in the robbery of the PNC Bank at 1779 Columbia Road NW Thursday morning. The individual is “a black male with medium complexion, height 5’7″ to 5’8″, and medium build,” police said. He last was seen wearing black pants, a brown shirt, a yellow vest and a white hard hat.

A wanted flyer for the person of interest first appeared on the Metropolitan Police Department’s Facebook page about 5 p.m. yesterday. The post appears to be the first time MPD notified the public about the individual.

So far, police have apprehended 67-year-old John Matthews in connection with robbery, according to authorities. Police made the arrest behind a building on the 2700 block of Ontario Street NW at 11 a.m., about 90 minutes after the robbery. The area is about a block from the PNC Bank.