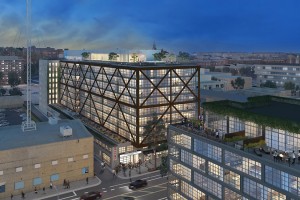 Earlier this week, “a healthy mix of journalists, tastemakers and culture vultures” gathered atop the newly opened Atlantic Plumbing Company building at 8th and V streets NW to raise their glasses and toast the official unveiling of a new neighborhood, “North End of Shaw.”

But what is North End Shaw, anyway — besides a hashtag and an unused Twitter account? Much like its ever-growing older brother Shaw, the area seems to have loosely defined edges.

If you’re Atlantic Plumbing, North End Shaw is a “bustling epicenter of creativity” and a neighborhood that’s “transforming into one of Washington D.C.’s hottest destinations.”

If you’re Washingtonian, it’s “a made-up neighborhood name that [developers are] using to distinguish their new development.” (Which is kind of the norm around here, points out Topher Mathews, who runs Georgetown Metropolitan.)

So, let’s put it up to a vote. What do you think? Is “North End Shaw” a valid neighborhood name? Do you think it should be called something else? Weigh in by voting in the poll and telling us what you think in the comments.