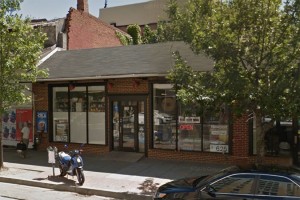 The robbery happened in the Dollar Plus at 1541 7th St. NW about 2 p.m. Sunday. The store is less than a block from Dacha, Ivy & Coney and Compass Coffee.

When the thief entered the Dollar Plus, he walked to the sales counter and went behind it, according to authorities. The man then flashed a handgun at a store employee. Soon after, he ordered the worker to open the cash register and lay on the ground.

The robber then grabbed cash and lottery tickets before fleeing.

A man on Friday afternoon also told a teller at a Columbia Heights bank to give him “all the money” in what possibly could have been a joke, police said.

The incident occurred in the Bank of America at 3100 14th St. NW about 1 p.m. Friday. The bank is part of the DC USA retail development.

When the man made his request to the teller, it wasn’t clear whether the demand was a joke, the bank employee later told authorities. Another person then interrupted an exchange between the teller and the man before the bank employee could get more information from him.

Soon after the interruption, the man smiled, laughed and walked away without any money.

A stabbing, a “barricade situation” and at least three additional attempted or completed robberies occurred in the Borderstan coverage area since Friday, too. We’ll have more details on the robberies this afternoon.